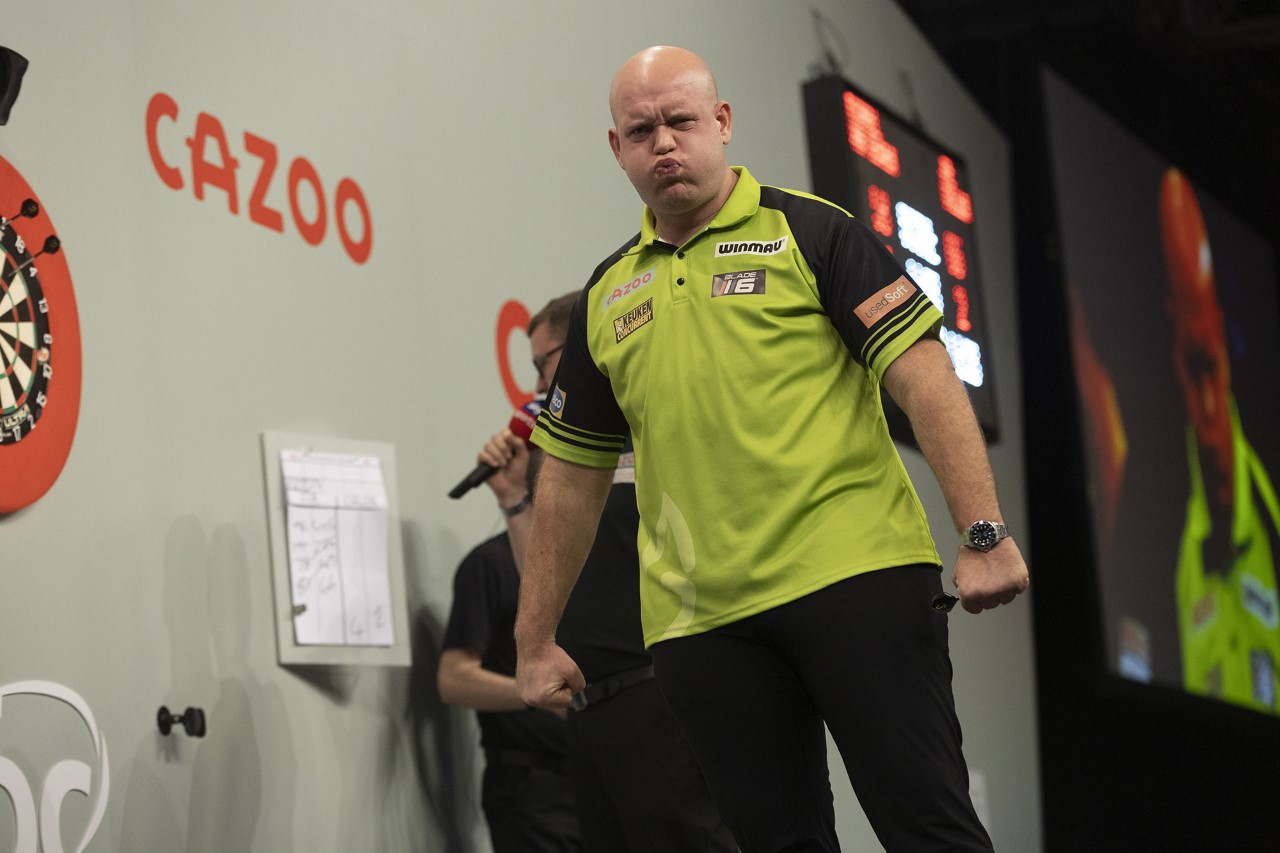 The first weekend of the Grand Slam has taken place and what an extraordinary event it is turning out to be. Only 2 days into the event we see MvG hit a Grand Slam record average of 115.19 against fellow Winmau man Joe ‘The Rockstar’' Cullen.

Once again, we see Van Gerwen illustrated a return to his best form as he broke the record set by Belgium’s man Dimitri van den Bergh in last year's event.

The three-time Grand Slam champion landed four 180s and five visits of 140 or more in a breath-taking display, and needs to win just one leg in his final group game with John Henderson to book his place in the last 16

Earlier in the event we see Fallon Sherrock whitewashing Mike De Decker 5-0, with a record average of 101.55, the highest average his by a female player in a TV event.

The pair were among 16 winners on Day Two, as the second day of group stage matches took place across two action-packed sessions.

Grand Slam debutant Sherrock lit up the Aldersley Leisure Village from the off in her contest with De Decker, hitting seven perfect darts in the opening leg.

That set the tone for a roof-raising display from the history-maker, who landed four 180s and hit five of her nine double attempts to surpass the 100.34 record set by Lisa Ashton at the UK Open in March.

The result sees the 27-year-old get off the mark in Group F as she looks to make it through to the knock-out stage in her Grand Slam debut.

Price secured his passage from Group A with a 5-0 rout of Krzysztof Ratajski, strengthening his hopes of lifting the Eric Bristow Trophy for a third time.

The world number one produced a typically high-octane display to continue his magnificent record on the Aldersley stage.

“I am the best player in the world, and I need to believe it a bit more,” Price reflected. “When I'm ruthless on my doubles and my scoring game is there, I don't think anybody can beat me.”

Elsewhere in Group A, Northern Irish youngster Nathan Rafferty shone in a 5-2 win over Martin Schindler.

Smith ensured his progression from Group H with an impressive 5-2 defeat of his former mentor Gary Anderson.

In Group D, Joyce secured qualification in style as he averaged 108.11 in a 5-1 defeat of Rowby-John Rodriguez.

Austria's World Cup runner-up Rodriguez will now face a sudden-death meeting with Stephen Bunting, who kept alive his hopes of going through with a hard-fought 5-3 victory over Chris Dobey.

In Group F, reigning champion Jose de Sousa came through a last-leg decider with Mensur Suljovic to make it back-to-back wins, and Luke Humphries bounced back with a 5-3 win over Matt Campbell.

Group B action saw Jonny Clayton continue his fine form with a 5-3 win over the impressive Bradley Brooks, while Mervyn King stays in contention thanks to a 5-4 win over Rusty-Jake Rodriguez.

Rob Cross fought off a Jim Williams fight back to win 5-3 to take a big step towards qualification from Group C, as James Wade saw off Boris Krcmar 5-2.

With all players having played two group matches, the final games in the round-robin stage take place across Monday and Tuesday.The £550,000 tournament continues on Monday, where the fate of players in Groups A-D will be decided.

We look at the results from the weekend and the schedule for the next round of the Group Stages: