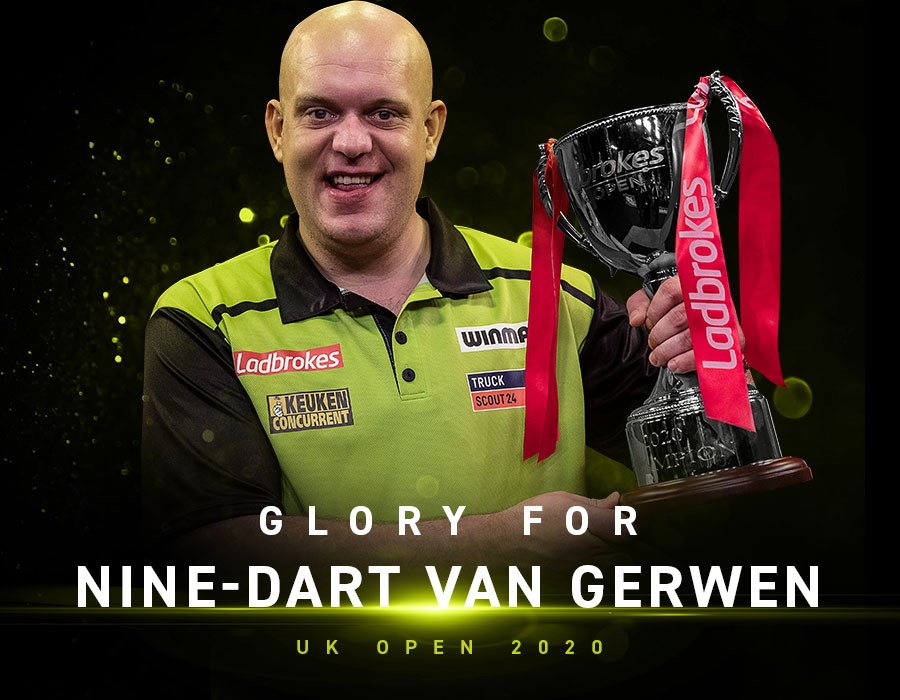 MIGHTY Michael van Gerwen blasted “boom” to the fans after wrapping up his 54th TV title in taking the Ladbrokes UK Open.

The World No.1, due to be a father for the second time any day, beat Gerwyn Price 11-9 in an classic final in Minehead last night (Sunday).

MVG was on the ropes at 5-1 down but The Iceman lost his cool on the doubles and was punished by the mean, green machine.

Van Gerwen, who hit a nine-dart perfect leg in his semi-final win over Daryl Gurney, said: “It was a hard day for me. I had to play three Premier League players and guys like Gerwyn Price, he’s a phenomenal talent.

“This means a lot to me, it feels incredible to get the nine-darter and another trophy.

Price said: “I think Michael will probably agree that I lost that game. I bombed numerous opportunities. My scoring game was there but I think three or four legs I bombed doubles. I possibly could have been 9-6 up at the third break.

“I was battling against myself going for doubles. If I hit my doubles I think I am possibly the best players in the world. At the moment Michael is that.”

Price made an incredible start to the final, ripping MVG apart in the opening session and roaring into a 4-1 lead.

Incredibly he soon increased the lead but Van Gerwen kept himself in the match by taking the seventh leg to narrow the gap to 5-2 and a cool double 16 gave the Dutchman a vital break of throw and just two legs adrift.

But The Iceman is just flying right now and immediately broke back. However, then MVG delivered six perfect darts and a double 11 finish for another break to make it 6-4 to Price at the second break.

Now the MVG juggernaut was back on track and thundering down the tungsten tarmac and made it 6-5, testing the Welshman’s bottle to the max.

But Price responded with double 18 to go back two in front in an absorbing encounter. MVG had hit five 180s in as many legs however both then missed a hatful of darts at doubles before Van Gerwen hit double two.

Suddenly The Iceman had totally lost his cool, missing eight, and MVG was back level at 7-7 with another double two kill.

Two more missed doubles for Price and Van Gerwen took the lead for the first time since the first leg in the match.

Then two more double misses for Iceman, 12 in the last four legs, and MVG took out a wonderful 136 to lead 9-7.

Another outstanding slick 96 finish in two darts and Van Gerwen was on the verge of glory.

Price finally hit tops to stay in the final. MVG then missed one dart for the title before the Welshman delivered a wonder double 10 finish to make it 10-9. But Van Gerwen finally finished it with double 18 to wrap up yet another title.