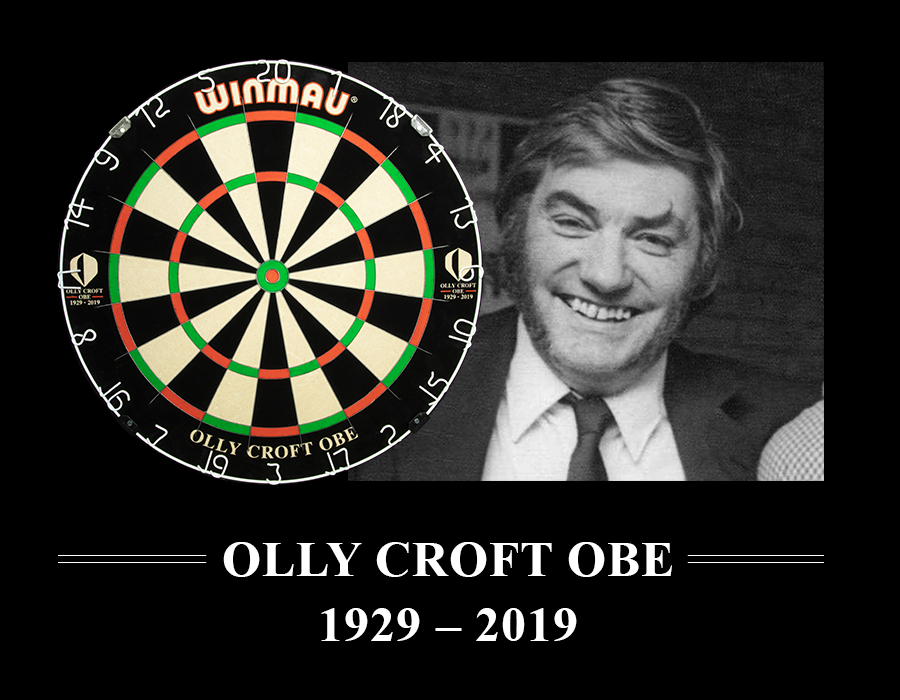 For in excess of four decades there has been no more charismatic or devoted character in world darts than Olly Croft.

When Olly first joined a darts team in the London Super League in 1967 he was hooked and soon became involved with the organisation of the league. At that time darts was in the doldrums and although there was an extant national darts association it was floundering and becoming ineffective. Olly, a self-made businessman, visualised the potential of darts and set about changing the game forever. He had ‘massive aspirations’ for darts locally, nationally and globally and he was to achieve them all.

After several meetings with interested parties during 1971 and 1972, Olly invited darts organisers to meet at his home in Muswell Hill in north London in January 1973 to formally discuss the setting up of a new national darts organisation. The British Darts Organisation (BDO) was established and from that day forth the game of darts was transformed, first into a national and subsequently by the establishment of the World Darts Federation (WDF) in 1977 a world sport. Darts was no longer bound to the public house. It was all around, at live venues and on television.

Players who had only previously played in pubs for money now found themselves thrust on stage in front of the television cameras at major BDO-organised events; some, such as Eric Bristow, John Lowe and Jocky Wilson becoming household names.

It seemed that nothing could stop the darts juggernaut, ruthlessly driven by Olly and the men and women of the BDO and beside him at all times at the wheel was his beloved wife Lorna. There have been some challenges to and criticisms of the BDO over the years but these were all overcome. Everyone toed the BDO line. Darts was Olly Croft and Olly Croft was darts.

But when the key terrestrial TV companies changed tack in the mid-to-late 1980s and more or less completely ceased broadcasting darts, the BDO seemed unable or perhaps unwilling to maintain the momentum and there was grumbling in the growing ranks of professional players. This resulted in what has become known as ‘The Split’ where sixteen ‘rebel’ professionals broke away from the BDO and formed the World Darts Council (WDC) later to become known as the Professional Darts Corporation (PDC). Darts now had two organising bodies so the legal wrangling began.

Olly remained at the head of the BDO through good times and not so good times until 2011 when he was relieved of his position within the organisation; something that Olly had much difficulty coming to terms with.

His 40-year association with the BDO had ended but his love of darts never waned and he kept an eye on all that was going on with the ‘new’ BDO and indeed with the progress of the PDC.

Winmau’s association with Olly and the BDO began in 1973 when the company was still known as Kicks Bros.  In that year Kicks’ became the first dartboard company to introduce silk-screen printing on the face of their dartboards but, more importantly, 1973 was to prove a major breakthrough for the company when Harry Kicks (senior) forged a vital deal with Olly to supply top quality dartboards to all of the major BDO events.

From then on, the Kicks dartboards would be the official dartboards of the BDO and be allowed to carry that organisation’s logo on its advertising as it was ‘Officially recognised and supplied’ to the BDO for nation-wide tournaments and, shortly afterwards through the World Darts Federation (WDF) numerous international contests. The strength of the Winmau/BDO relationship was reinforced when in 1976 the company’s advertising included alongside the Winmau logo, that of the BDO.

In 1975 when the recording company Phonogram ended their two-year sponsorship of the World Masters darts tournament, Olly spoke to Harry snr suggesting that perhaps he might consider putting his company name to and money into the Masters.  It was during these discussions that Olly suggested changing the actual company name to Winmau (rather than just the name of its best dartboard). Harry took Olly’s suggestion on board and in early 1976 the name of the company was changed permanently.

Thus the Winmau World Masters was born as was a decades-long partnership; a sponsorship that lasted until 2018.

Over the years a fantastic working relationship was witnessed and many long-term friendships forged between Winmau and the BDO and particularly between the company and Olly Croft.

On receiving news of Olly’s passing the company posted

We are incredibly saddened to hear that Olly Croft OBE has passed away at the age of 90. We can’t put into words the love, passion, dedication and hard work that Olly brought to the sport of darts, and everyone involved owes him the biggest thank you for taking the game out of the pub and bringing it to huge television audiences.

“I am heartbroken today. I’ve known Olly for 20 years and consider him and his family to be close friends of myself and the company. Olly was one of our biggest supporters and there is no doubt that he has contributed towards our success and was the visionary that helped propel darts into the public limelight. Olly was an all-round great guy… Our thoughts are with Olly’s family, friends and all that knew him. I will miss him deeply and will always love and respect him as a friend and a businessman.”

Sincere condolences to Olly’s family from everyone at Winmau to a true legend of the sport.