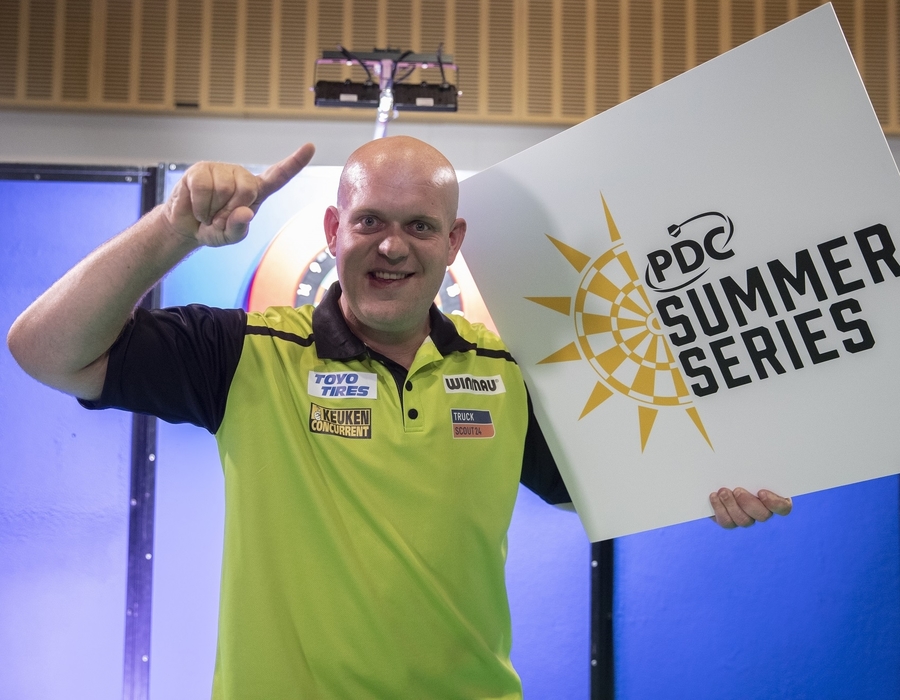 World number one Van Gerwen returned to competitive action with victory in Wednesday's Players Championship at the Marshall Arena, and added a second £10,000 title with his success 48 hours later.

Van Gerwen was in dominant mood throughout the day, dropping only seven legs in his first four games as he overcame Alan Tabern, Kim Huybrechts, Robbie Collins and James Wade.

He then averaged 107 in a 6-4 quarter-final win over Chris Dobey, and was a 7-4 winner against Jeff Smith in the semi-finals.

Portugal's De Sousa moved into a 2-0 lead in the final as he targeted the third ranking title of his career, but a miss at tops for a 117 in the third leg proved a turning point.

Van Gerwen stepped in to finish double eight to get off the mark, and took out huge checkouts of 130, on the bull, and 146 to surge into a 4-2 lead, before winning two more legs to extend the advantage.

De Sousa hit back on tops in leg nine to punish two misses from Van Gerwen, but the Dutchman recovered to take out tops and double 14 in the next two legs to claim the triumph.

"It's a good result for me," said Van Gerwen. "I had some really good games and I had to fight hard today, and sometimes that's good because it gives you a lot of confidence.

"I had a phenomenal game with Chris Dobey, and Jose is a brilliant player who has been in finals before. The 130 and 146 finishes I think won me the game.

"I feel good and I'm comfortable but I still think there's plenty more in the tank. My goal was to win two titles and I'm doing well and I hope I can do some more damage in the next two days."

De Sousa was in stunning form in his best run of 2020, winning five of his six games in reaching the final with an averages between 102 and 109.

He saw off Adam Hunt, Aaron Beeney, Danny Noppert - who averaged 109 himself in a high-quality thriller - Gerwyn Price, Stephen Bunting and Daryl Gurney to win through to the final.

Gurney reached his second semi-final of 2020 in an impressive run, while Canada's Smith followed up his run to the final of Players Championship One in February by reaching the last four.