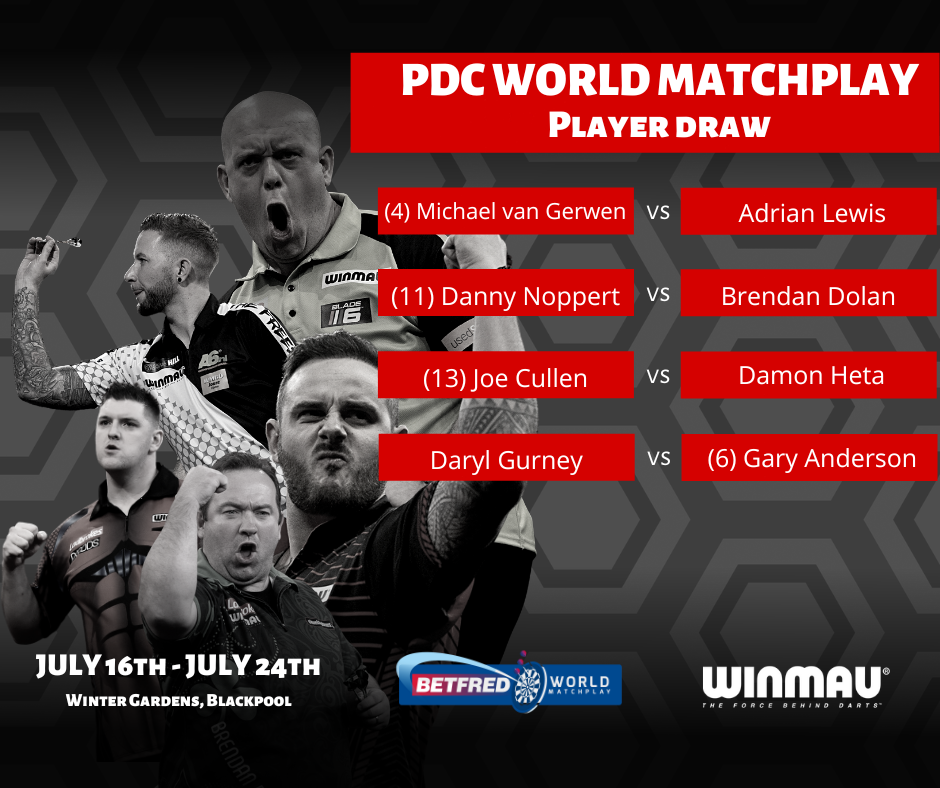 The main tungsten event of the summer is back this weekend as the Betfred World Matchplay returns to Blackpool’s Winter Gardens. Thirty-two of the worlds very best will battle it out for the Phil Taylor Trophy.

Michael van Gerwen returns to action after winning the Premier League last month, and taking time out for surgery on a long-standing condition, and will face back-to-back World Champion, and last weekend’s Pro Tour winner, Adrian Lewis in the first round.

Mighty Mike has not won the tournament since 2016 after he defended his title against Phil Taylor 18-10 averaging an impressive 103.93 over 28 legs of darts. The World Number 4 will have his eyes set on adding more success to what could build into an impressive year, picking up the Austrian Darts Open and the European Darts Open on the Euro Tour in addition to the aforementioned Premier League.

Jackpot will be no pushover in Blackpool however, after reminding watchers of his supreme natural talent to win Players Championship 20 beating Boris Koltsov 8-4 in the Final.

The Stoke-on-Trent thrower also beat Nathan Aspinall 7-2 in the Semi Final and 2021 Premier League Champion Jonny Clayton in the Quarter Finals, winning 6-4 and averaging just shy of a ton in the top-class tungsten affair against the Ferret.

UK Open champion Danny Noppert will make his return to Blackpool having missed out on qualification for the tournament last year. What a difference twelve months can make!

The Freeze will be full of confidence heading to the Winter Gardens having picked up his first TV title at the UK Open, performed superbly on the European Tour, as well as victory in Players Championship 19 after coming from 6-3 down to beat Andrew Gilding 8-6 in Barnsley on Saturday.

The Joure thrower is seeded number 11 and will face off in the first round against Brendan Dolan in an all Winmau tie, with Dolan going into the tournament as the most recent winner of a PDC tournament after winning Players Championship 21 against Jonny Clayton, recording an 8-5 victory over the Ferret.

The 31-year-old who represented his country at the World Cup, has only won one match on the famous stage back in 2020 against former World No. 1 and World Champion Gerwyn Price, beating the Welshman 10-7 before losing to Adrian Lewis in the Last 16.

However, this year the confidence of the Winmau star is as high as it’s ever been after winning that UK Open in Minehead against Michael Smith back in March. He also reached the Semi Finals of the recent Dutch Darts Masters losing to the eventual winner and 2020 Matchplay champion Dimitri van den Bergh.

Brendan Dolan will play at the Winter Gardens once more and will head into his match with Noppert with his confidence restored after winning his first Pro Tour title of the year on Monday. The History Maker has played this tournament a few times, but his best performance must be his 10-7 victory against Raymond van Barneveld in the 2016 World Matchplay.

The Winmau man was not guaranteed his spot at the tournament despite never moving out of the top 16 on the Pro Tour order of merit. Dolan hadn’t won a match in the first three tournaments in Barnsley but pulled off a sensational run to victory on Monday, including a victory over his first-round opponent Noppert in the Last 16 winning a last leg decider.

Joe Cullen the 2018 Quarter Finalist returns to the Winter Gardens in what has been the most successful year of his darting career. The Rockstar claimed the World Masters back in January which guaranteed him a spot in the Premier League, making his debut in the darting roadshow where he upset the odds and went all the way to the Final, losing a last-leg decider to Michael van Gerwen.

The Bradford thrower has been handed a very difficult First Round tie in this year’s tournament, as he prepares to face recent World Cup winner Damon Heta who was the highest earner not to be in the World’s top 16 on the Pro Tour order of merit.

The Rockstar is one of two players this year to win back-to-back Pro Tours having won both Players Championships 3 and 4, including an 8-1 victory over Dimitri van den Bergh in the Final with an average of 102.34.

More recently Joe struggled in the recent Pro Tour events losing in the First Round twice and the Second Round once, after a run to the Last 16 in Players Championship 18 where he lost to Nathan Aspinall on Friday.

The Premier League runner up is ranked number thirteen for the tournament and could see a matchup with Michael van Gerwen if both players come through their First-Round matches.

Daryl Gurney will face 2018 World Matchplay champion Gary Anderson in the First Round in Blackpool, with Superchin looking to build on his Quarter Final performance at the World Cup with partner Brendan Dolan for his country last month.

The Northern Irishman has made the Semi Finals on two occasions in the Matchplay (2017 and 2019) and beat the Flying Scotsman 11-9 in the Second Round back in 2019 with an average of 103.26, despite Anderson averaging over 105. The winner will face either Danny Noppert or Brendan Dolan in the Second Round.

The World Matchplay gets underway on Saturday night live on Sky Sports as the start of the First Round commences, with four matches kicking the tournament off at the Winter Gardens.