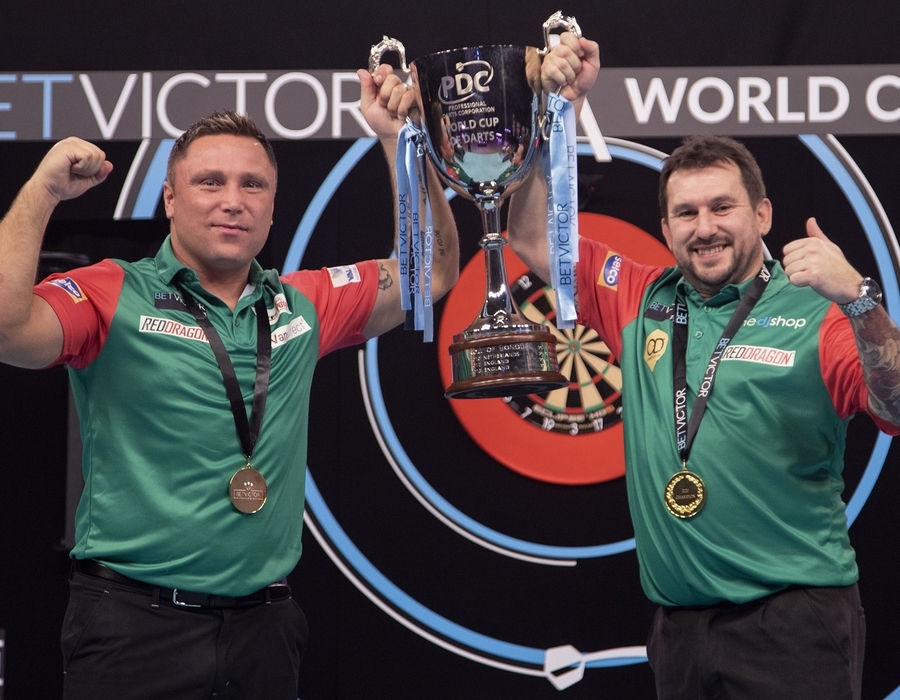 The Welsh duo of Gerwyn Price and Jonny Clayton secured their country’s first BetVictor World Cup of Darts title on Sunday night after a dominant 3-0 win over England in the final.

Wales, appearing in the final for the third time, punished Michael Smith and Rob Cross in ruthless fashion whitewashing the English pair in Salzburg to claim a £70,000 top prize.

The opening Singles tie of the final saw world number three Gerwyn Price take on Michael Smith, with the Welshman overcoming his opponent in a 4-1 victory.

The crucial moment in the encounter came in the fourth leg when Price broke throw to punish Smith for missing six darts at a double to hold.

World number four Smith was unable to recover as Wales took a 1-0 lead in the tie.

That advantage was then doubled when Jonny Clayton averaged 105 in a 4-2 win over Rob Cross to put his side one victory away from the crown.

Clayton and Price didn’t have to wait long to seal their victory, beating the English team 4-3 in the Doubles match, with Price taking out 64 on tops and the team finishing with a sensational average of 103.

Wales become only the fourth team to claim World Cup glory after previous wins for England, Netherlands and 2019 winners Scotland.

"I’m the proudest man on the planet right now and to play with Gezzy, the best player in the world at the moment, I’m just so happy," said Clayton after the final.

"This means the world to me, and to beat England in the final, I'm so proud."

Price has claimed back-to-back Grand Slam of Darts wins over the past two years, won October's World Grand Prix and also took the World Series of Darts Finals titles at the Salzburgarena in September.

However, he insisted: "It's the proudest moment of my darting career - I'm quite emotional.

"I've had some success recently for myself but to win this for Wales this means so much to me.
"I know I’m playing well at the moment but this is a doubles game and I couldn’t win it without Jonny. This is a team and we deserve it."

Beaten duo Smith and Cross also spoke to the media after the decider and Cross was keen to play up their achievement, saying: "We’re proud of what we’ve done this weekend but we didn’t play our best in the final and they deserved to beat us."

With fans still unable to attend events due to the Covid-19 pandemic, the final was played in different circumstances to previous years but Smith spoke of his delight to still be playing and was quick to credit his opponents.

"It’s amazing just to be here and playing darts but I have to say the better pair won today and they fully deserve it," said Smith.

"We’ve given it our all this weekend and dug deep when we needed to, but just didn’t do enough in the end."

Smith and Cross began the final day of action with a dramatic 4-3 pairs victory over Austria’s Mensur Suljovic and Rowby-John Rodriguez.

Suljovic had first seen off Smith averaging well over 100 to recover from 3-0 down before Rodriguez would go on to miss a handful of match darts against Cross in their singles battle.

The Doubles decider also went all the way to a last leg where it was England who prevailed to set up a semi-final with Belgium, who defeated Canada in the last eight.

Wales’ quarter-final opponents were Australia, and once again a Doubles decider was required to separate the teams after Price defeated Simon Whitlock but Clayton was unable to do the same against Damon Heta, who made an impressive World Cup debut for Australia.

The Welsh team were too strong in the pairs match progressing after a 4-2 win.

The semi-finals saw England take on Belgium and Wales face Germany, who had knocked out the Netherlands in the previous round, taking advantage of a back injury that saw Michael van Gerwen requiring treatment earlier in the morning.

A Doubles match was unrequited in the last four for England as Singles wins for Cross and Smith against Dimitri Van den Bergh and Kim Huybrechts respectively moved them in to the final.

It was also a straightforward win for eventual winners Wales as well, with Price beating Gabriel Clemens 4-2 and Clayton moving past Max Hopp by the same scoreline.

Despite the English pairs best attempts, Wales were far too strong in the decider winning every rubber and securing a first World Cup title with a 3-0 win.

Germany’s run to the semi-finals was the best in their history in the event, as Clemens and Hopp enjoyed a memorable weekend which included their victory over four-time champions Netherlands in the last eight.