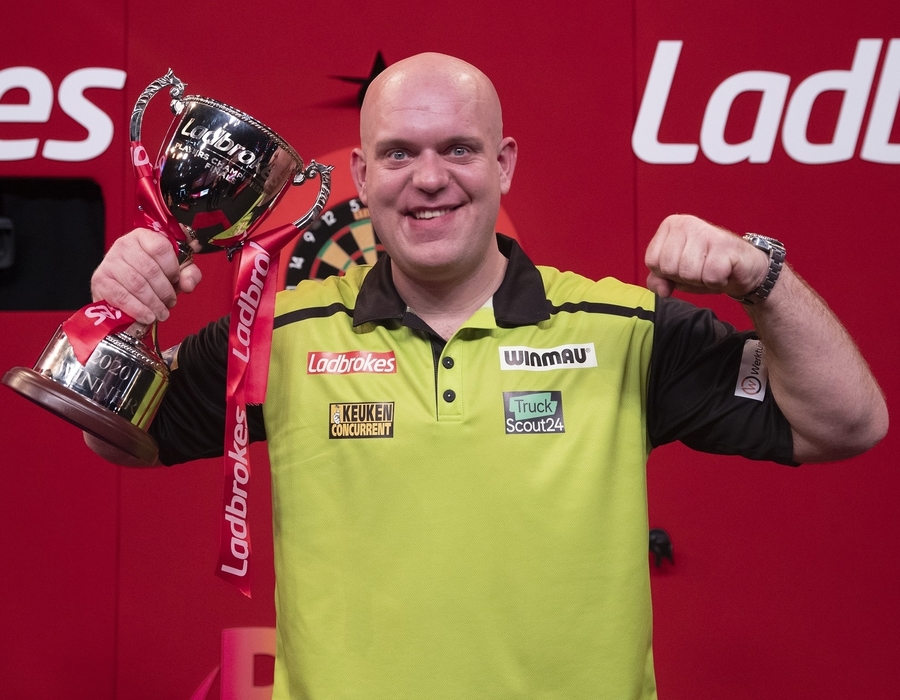 MvG averaged an outstanding 105 in the final as he lifted the trophy for a sixth time in his career, the World No.1 was pushed right to the peak of his powers by Mervyn King who forced a last-leg decider for the £100,000 winner’s prize.

The World No.1 was once again pumped up and passionate on the oche during the tournament, but Michael was clearly emotional after picking up his first TV title since the UK Open in March.

"I'm proud of myself," admitted Van Gerwen. "I've worked hard for this, and to come back stronger and stronger like this means a lot to me.

"Of course, it's been a long time since I won a tournament so I'm glad I played a very nice tournament. I played well and I'm glad to have my hands back on the trophy.

"I've been out of form for a few months and you need to battle back. You have to fight back and I'm glad I did."

He was also back to his best throughout six games at the Ricoh Arena, averaging 102 for the tournament before being visibly moved as he held the trophy aloft after a winning final of the highest quality.

The success sees Van Gerwen claim the Players Championship Finals title for a sixth time - a personal first which also sees him become only the second player in history, behind Phil Taylor, to win a televised event more than five times.

Van Gerwen averaged 110 in a sensational 10-5 quarter-final win over Dirk van Duijvenbode, which he sealed with a 148 checkout, before then seeing off Gerwyn Price 11-8 from 8-6 down in the semi-finals.

The final was another tight affair, with Van Gerwen opening with a 96 finish only for King to take out 115 and 107 on his way to a 3-1 lead.

King capitalised on four misses from the Dutchman to square the final again, only for Van Gerwen to take out 72 and 160 to move two legs clear, before a 120 finish put the world number one 7-5 up.

After King once more hit back to level, Van Gerwen produced a brilliant 135 bull finish only to see his opponent hit the same bed to take out 126 before levelling at nine-all with a 13-darter.

Double eight moved Van Gerwen 10-9 up and to the brink of victory, before King posted tops for a 13-darter to create a deciding leg.

However, Van Gerwen was first to a finish and posted double eight with his fourth match dart to finally seal a memorable title.

"I had to play my best performance I could, because Mervyn was playing a phenomenal game," added the 31-year-old. "I couldn't get rid of him and he kept pushing me to the end.

"I needed a couple of really good finishes but I was thinking 'don't let this slip out of your hands'. That was the only thing that I was worrying about."

King, who was runner-up to Paul Nicholson in 2010, played his part in an epic decider after winning through to his first televised final for six years on Sunday.

The 53-year-old had averaged over 100 in a stellar quarter-final win as he saw off Damon Heta 10-8, before punishing a below-par performance from World Champion Peter Wright in an 11-4 semi-final success.

However, he was left to rue a fifth defeat in a televised PDC final as Van Gerwen left him waiting on 45 in their sudden-death leg.

Price followed up last year's run to the final of the event by reaching the semi-finals this time around, edging out Joe Cullen 10-9 in their quarter-final.

Wright, meanwhile, came from 6-5 down to defeat Michael Smith 10-6 in their last eight contest, which also saw the St Helens thrower miss double 12 for a nine-dart finish.