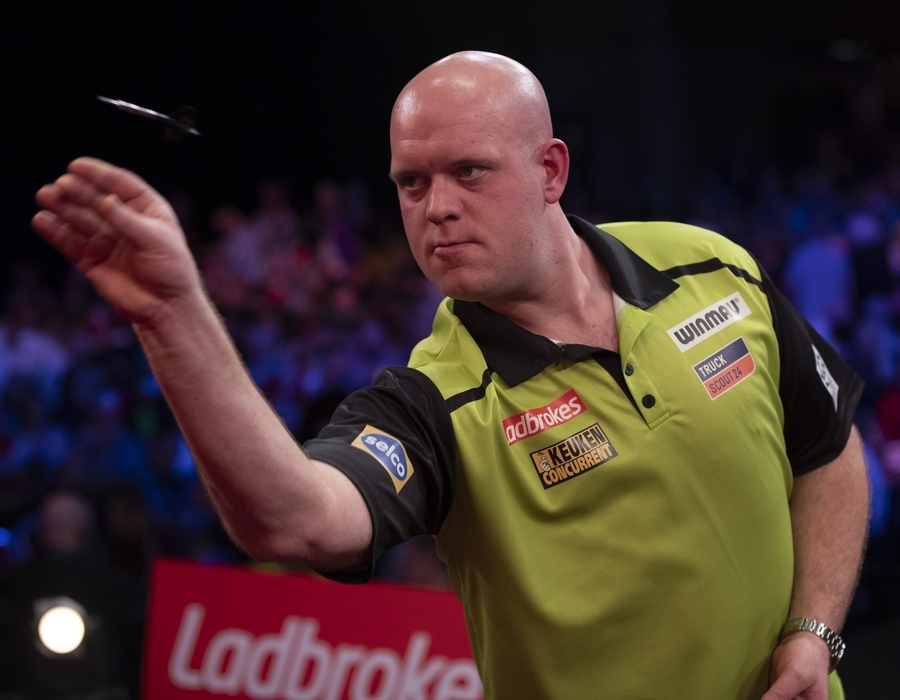 The 2021 Ladbrokes Masters begins on Friday at the Marshall Arena in Milton Keynes as 24 of the world's top stars compete for the first televised title of the new season.

The ninth staging of the event will see the top 24 players from the new-look PDC Order of Merit following the World Championship competing across three days of action.

The £220,000 tournament has been expanded to feature eight additional players this year, with the first round seeing the players ranked from 9-24 on the PDC Order of Merit facing off.

Five-time Masters winner Michael van Gerwen also opens his challenge on Saturday night, and is the 9/4 pre-tournament favourite with sponsors Ladbrokes, ahead of Price (5/2) and Wright (7/1).

The Dutchman, who will face Jose de Sousa or Jonny Clayton in round two, who previously held an outstaing 20-match winning streak on the Milton Keynes stage, ended by Clayton at last year's event.

Van Gerwen's last televised outing saw him defeated at the World Championship by a display which earned Dave Chisnall the Televised Performance of the Year award and ultimately resulted in the Dutchman's loss of his world number one status to Price.

Facing a new challenge in 2021, Van Gerwen believes now is the right time to finally part with the darts that brought him three World Championship crowns among a trophy haul of over 100 PDC titles.

"It's been a longer break than I'm used to but I've not been sitting still. I've been to [manufacturers] Winmau and we've been busy producing some new darts for me," Van Gerwen explained.

"I've got so many good memories with my old darts but I can feel now they're starting to be worn out a bit.

"You need to make the right choice for yourself and move to another dart. I think The Masters is a nice tournament to try out my new darts.

"I'm ready to play again and The Masters has all the top players in a nice format so it's something for everyone to look forward to.

"The break has given me time to prepare and make sure I start off the season well."

Reigning champion Peter Wright will begin his title defence against either Poland's Krzysztof Ratajski or Australia's Simon Whitlock in Saturday's second round as the world's top eight enter the action.

Former World Champion Wright came out on top of a dramatic final with Michael Smith in last year's event, with the world number three aiming to hold onto his crown and get the year off to a perfect start once again.

"But I've got over it and now it's all making the most of the new season, starting with the defence of my Masters trophy.

"My target for this year is to beat Michael [van Gerwen] in the semi-finals of all the tournaments because we could end up facing each other quite a lot as second and third seeds.

"I still don't know what darts I will be using but that's not an issue for me. My mind is all ready to go and that's the main thing."

Gerwyn Price will step onto a PDC stage as World Champion for the first time since winning the Sid Waddell Trophy on January 3 as he takes on either Joe Cullen or Stephen Bunting.

The Welshman became World Champion and world number one on a special night at Alexandra Palace at the start of the year, meaning Price comes into The Masters as the top seed.

Price is yet to make it past the quarter-finals of The Masters, a record he intends to set straight this time around.

"It's going to be quite exciting when John McDonald introduces me as the World Champion and world number one. Saturday night can't come quick enough.

"It's nice to have a little break and have some time off, but I'm looking forward to getting back to what I do best, winning tournaments.

"I still think there's a lot more to come from me, I didn't play my best at the World Championship. I'm eager to get back on the stage and show how good I can be."

Premier League champion Durrant, one of six debutants in the event, is aiming to put his confidence issues behind him this weekend.

A sensational first 21 months in the PDC culminated with Premier League glory in October, but soon after Durrant contracted Covid-19 - which proved to be the start of a troubled end to 2020 for the three-time Lakeside Champion.

"Ever since the Premier League final it's all gone badly wrong, in terms of both health and technical problems in darts," Durrant explained.

"After I lost at Ally Pally I took two weeks off. It was difficult not throwing darts but it worked and I've re-found the love for practice.

"The Masters is coming at the right time for me. It gives me a chance to eradicate all the confidence concerns I've got.

"I need a huge win over Mervyn King, he is someone I have all the respect in the world for and I know how tough it will be to beat him.

"It's a new year and I'm feeling good. The Masters will be more important to me than a lot of other players confidence wise."

The second round will be split across two sessions on Saturday January 30, with former champion James Wade starring in the afternoon session before Wright, Price and Van Gerwen take to the stage in the evening.

The Ladbrokes Masters will conclude on Sunday January 31, with the quarter-finals in the afternoon session and the semi-finals and final in the evening session.