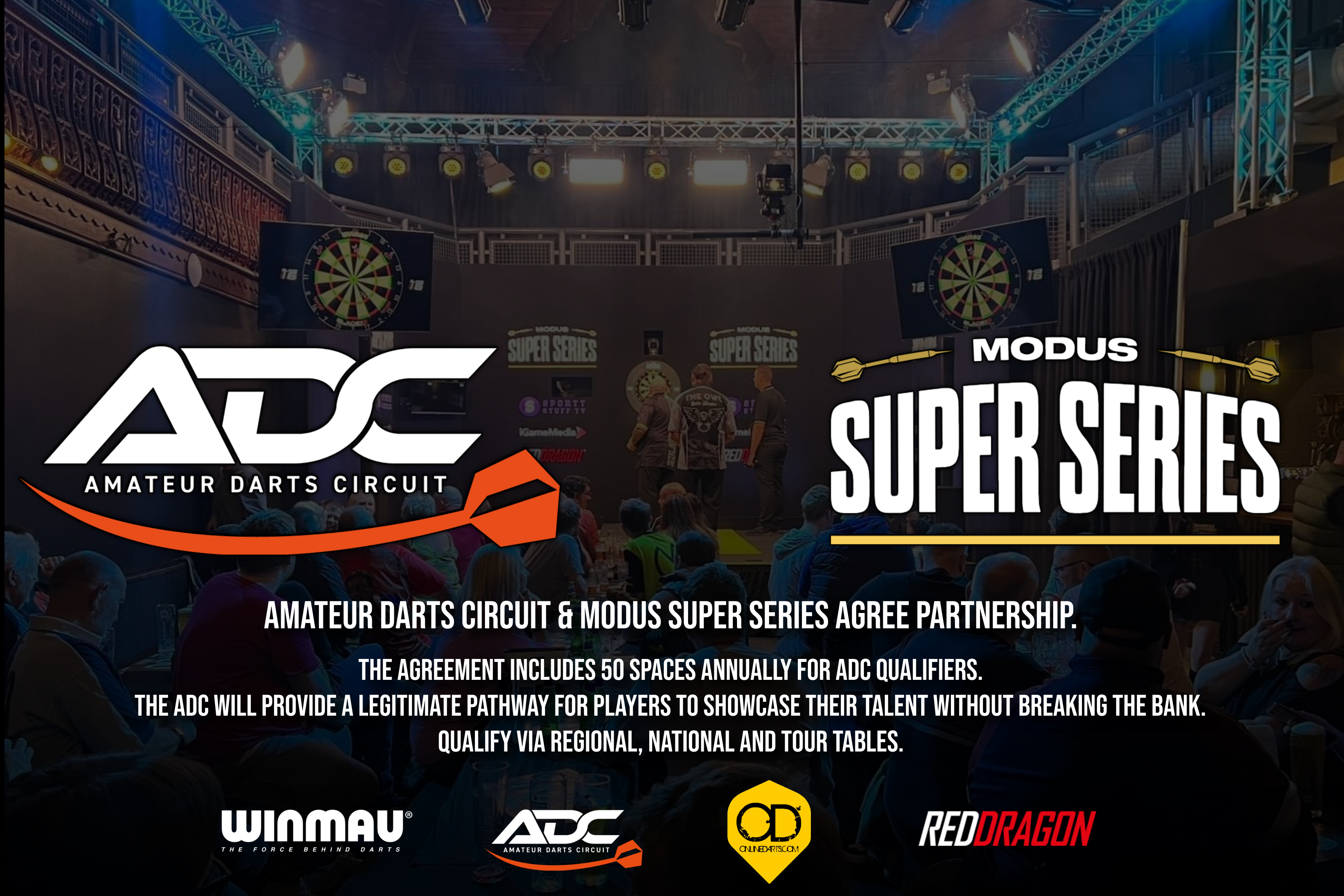 Find out more about the MODUS Super Series here.

Portsmouth, UK, 18th October, 2022 — The MODUS Super Series has announced it will offer a new qualification route in partnership with the Amateur Darts Circuit (ADC), enabling amateur players to get the opportunity to compete in the televised tournament alongside invited players each week.

The agreement includes 50 spaces annually for ADC qualifiers, who will earn their spots through a series of ADC regional events and rankings. Full details of qualifying criteria will be announced by the ADC imminently.

The MODUS Super Series is hosted at a top-specification, purpose-built location in Portsmouth, with more than 30 hours of matches broadcast live Monday to Saturday every week on Sporty Stuff TV (SKY 437, Freesat 250, Freeview 264) and online at sportystuff.tv and the MODUS Super Series YouTube Channel.

It is open to non-PDC (Professional Darts Corporation) Tour Card holders over the age of 18 and legends from the sport, with Robert Thornton, Fallon Sherrock, Lisa Ashton, Martin Adams, Neil Duff, Kevin Painter, Mikuru Suzuki and Thibault Tricole among the high-profile participants playing for a share of £1million in prize money and fees.

The ADC have been allocated one of the 12 places available to players each week, including the chance to qualify for each stage’s Champions Week, which offers a £20,000 winner’s prize.

Billy Lovell, MODUS Super Series Head Of Operations, said: “We are delighted to have been able to offer this qualification route via the ADC. We are inundated with calls and e-mails from amateur players who believe they are good enough to compete at the MODUS Super Series – well now they can earn the chance to prove themselves.

Scott Hunt, ADC Head of Global Operations, said: “We are pleased to team up with the MODUS Super Series to offer even more opportunities to amateur players to progress further and fulfil their dreams.

“There is unearthed talent throughout the UK and beyond that don’t have the backing to compete at the highest level and feel they don’t have the confidence to take the next step. We are giving these players a chance to prove themselves.

“We can guarantee the qualifiers via the ADC will represent us well and this will encourage them to kick on in their careers.”

ADC founder Steve Brown added: “The ADC was born out of offering local players the opportunity to take the next step and gain recognition without the expense of travelling the world to earn points, as has been the case with organisations before us.

“We firmly believe in the regional and national ranking system that we are implementing, not just in the UK, but around the world. The MODUS Super Series is where all the amateurs want to be, and the ADC can now provide players with a legitimate pathway to showcase their talent without breaking the bank.

“With over £1million in prize money on offer from MODUS, along with the opportunity to play on TV, which in turn will increase the chances of personal sponsorship plus further opportunities, 2023 is set to be a great time to be an ADC member.”

), with 12 players battling it out to be crowned the inaugural MODUS Super Series champion and to claim the £20,000 champion’s cheque in Saturday’s final.

The MODUS Super Series is a successor to the Online Darts Live League. Launched in 2020, it grew from a COVID-era, play-at-home darts tournament to a made-for-TV, studio-based competition that ran for two years before progressing to its current form.

Find out more about the MODUS Super Series here.