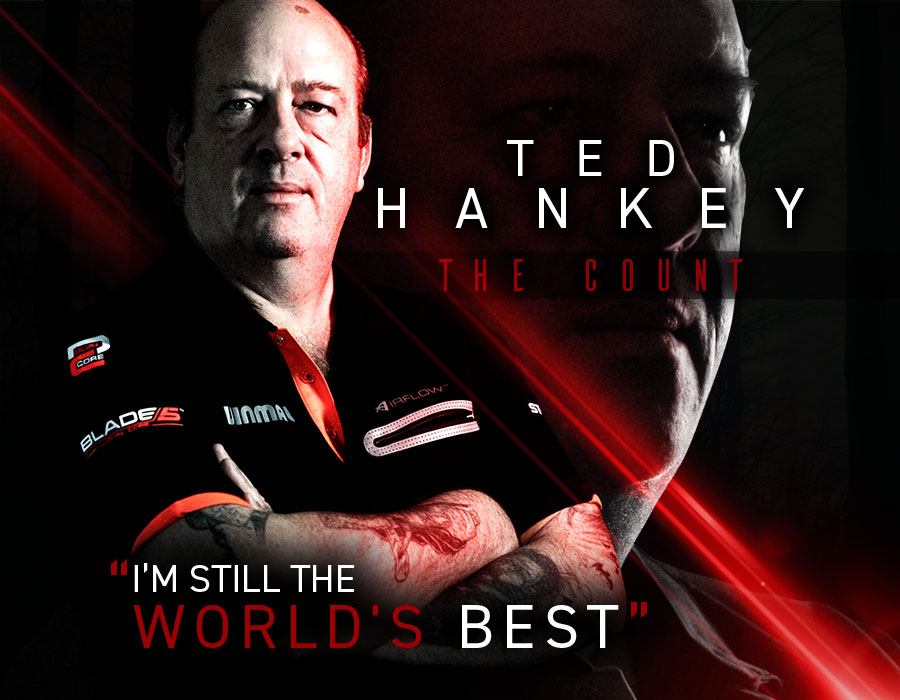 Ted Hankey boldly claims he’s back on the comeback trail and playing as devastatingly well as ever, since overcoming sight issues.

The two-time World Champion claimed his first title in spectacular style blowing away Ronnie Baxter in an unprecedented 46 minutes, but Ted knows that so much potential has been left unfulfilled by one of the World’s most famous and charismatic entertainers.

Ted’s foray into the PDC ended swiftly with little success by his own standards and global reputation, and it is regaining World success that still drives the ever-positive Ted Hankey to this day.

Ted has suffered for the last 10 years with diabetes and eye-pressure issues, and then last year lost his biggest fan and the rock in his darting life, when his father died.

However, Ted has fought on and since got a handle on his condition, also turning his biggest loss to date into a new found motivation in making up for lost time, in honour of his father.

Looking as well as he has in over 10 years and playing more than he ever, even when in his pomp, Ted the pantomime villain, who it could be argued invented the electric entertainment of darts on stage long before today’s gladiators took the limelight, has set his sights on returning to the very highest levels of the game and still believes he has the game to compete with anyone in the World.

Ted’s focus is to get razor-sharp in the competitive arena again, so that he can open up any playing avenue that he desires.

Ted said “I’ve been back on the BDO circuit for around 6 years and whilst I’ve tried my best, I’ve not been in the best mind-set to show everyone how good I can be. Whilst my health and family issues have played a part, the buck stops with me in getting back on top of the World as I still know I’m one of the very best there is.”

With “The Count” practicing for a few hours a day it’s not hard to see in his mesmeric throw just how much potential Ted still has in performing at the highest echelons of the game, and the one thing that nobody will ever take away from the double World champion is his downright self-belief that while he can still raise a dart, there is no better player on the planet when in full flow.