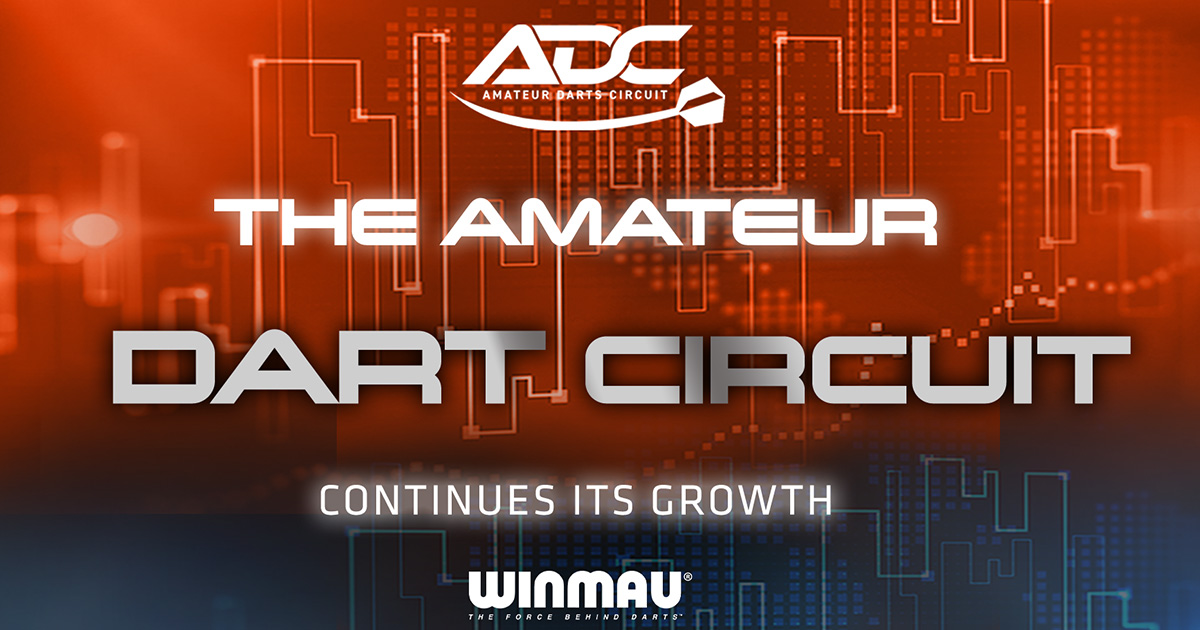 Scott Hunt spoke about the project and aims the Amateur Darts Circuit will look to achieve in the 2023 darting year. Scott Hunt along with Steve Brown run the rapidly growing organisation.

“Amateur Darts Circuit was launched in January 2022 as we moved out of the COVID era, the way the game was played had slightly changed, therefore we wanted to move forward and offer more options for the individual without having to always rely on teams.”

“We have recently launched our new concept, 'The Vault Round-Robin Series' that is based on a fast-fire format with multiple games for your entry fee. We felt that players enjoyed playing more games and it has allowed us to target beginners to start their journey with us. Using this format, we have created opportunities for players to gain valuable game time at local level, with the chance to qualify for MODUS Super Series for the top end players.

“We have also introduced Women’s Singles League and a Women’s Tour to run alongside the Men’s Open Series. The future includes a revamp of grassroots darts and making it more accessible for all. Using the software, players can now search for local tournaments at the click of a button.”

The Amateur Darts Circuit has recently partnered with the weekly run live competition: The MODUS Super Series, which has seen the likes of Colin Osborne, Fallon Sherrock and Martin Adams all grace the tournament following on from Online Live League.

“We reached out to MODUS to create a legitimate pathway to TV for all amateur players. Many players were questioning how you get picked and we felt there was a gap in the market to allow any player the chance to qualify. Using our Regional Tables and new Vault Round-Robin concept, we are providing players the chance to qualify via their local venues, without the expense of travelling the country/world to make a name for themselves.”

“It a massive boost to our system, as it is creating a visible pathway to the next level. There are hidden gems throughout the darting world that don’t have the time, backing or confidence to take the next step and our system is now giving these players the opportunity to shine.”

The recently played weeks of the Super Series has seen winners of players associated with the ADC, as Number 4 in the current rankings Adam Mould beat Ian Moss 4-3 to claim the £5,000 winners’ cheque.

Before the PDC World Championship kicked off, Winmau Championship Tour 6 Runner Up Adam Warner claimed glory in the MODUS Super Series, with many fans cheering the man from Sheffield on as he qualified for Champions Week where £20,000 goes to the winner!

“We are immensely proud of the lads who've won through to Champions Week at their first attempt. Both Adam Warner and Adam Mould have been huge supporters of the ADC since its inception, and we are really happy we have provided the opportunity to show the world what they can do. Both winning £5,000 for a week's work, and the potential to win £20,000, not bad, is it?”

The ADC was a huge success in its debut year, and any aspiring darts player who believes they have the talent should get involved in the events lined up for 2023.

“Players can get involved for £10.00 a year membership that can be found on our website uk.dartscircuit.com. We explain the steps to get your membership and how you can find opens, knockouts, round robins and more.”

Scott Hunt went on to explain how the Amateur Darts Circuit is being so successful, with players like Adam Atkinson, Adam Smith-Neale, Steve Brown and Colin Osborne benefitting from the new system.

“First and foremost, we are offering competitive darts at local level and creating a clear pathway from the pub game to the next level. You can now win ranking points from your local bar, that go towards a regional and national ranking table, that in time, will allow you to take the next step to TV and the professional game. With the support of Darts Atlas, our software partner, the ranking points are now updated automatically with all competitions using tablet-scoring.”

The ADC continues to grow to a more global platform with even more opportunities being presented year on year, with a huge growth in the technology for the sport during the lockdown period which is continuing to benefit many darts players.

“I see the future of amateur darts worldwide using technology as the main driver. All opens, events and leagues will be automated with points, scores and stats updated in real-time. Using digital software, we can then create regional, national, and global ranking systems, to show a clear pathway to the top.”

“It also allows us to tap into new areas and create accessible options for players to get involved. At the end of the day, you can play darts anywhere, anytime, and now with the introduction of technology in the game, we can link it all together.”

“Technology is key. Without the use of tablet-scoring and automated competition management, we wouldn't and couldn't offer the opportunities we are. Stats, Data, and real-time updates are driving us forward and have allowed us to link up with MODUS Super Series. Watching your friends and family compete live is driving mass awareness for the brand and in time, you will be able to watch every knockout and every tournament from your mobile phone.”

“All other organisations have their own goals and systems that sit differently to ours. Now, we offer opportunities for the individual at local level, with progression to TV without breaking the bank. As we progress, we will look at a structure based on team games, but only when we have built our foundations.

The introduction last year of the Winmau Championship Tours, included professional setups such as the use of the brand new Winmau Blade 6 boards which were used at the recent PDC World Championship. Many players were thrilled at the idea of playing competitive darts with professional equipment supplied to the ADC by Winmau.

“Winmau are the leading manufacturer in the world, bar none and for us to be backed by them is a huge boost to all amateur players. We all share the same vision for the game and that is to make darts more accessible for all. They have brought out certain products to allow people to play from anywhere, and we support the transition of those players to the next level via our opens, round-robins, and tours.”

The Red Dragon Champion of Champions is another competition held during the year which gives amateur players grass roots players opportunities, with some of the winners of the Championship Tours granted spots at the Finale in Cardiff, including Dan Read who reached the Plate competition Final.

“We will be looking to team up with Red Dragon once again to offer the winners a place in the Champion of Champions. The event itself is one of the biggest in the world for amateur players and we are lucky to be able to offer opportunities to qualify via our system.”

Scott and Steve will continue to help organise Amateur Darts in 2023 after a successful debut year for the Amateur Darts Circuit, including more competitions such as the Vault Round Robin event, with the Finals set to be played in Bristol at the end of October.