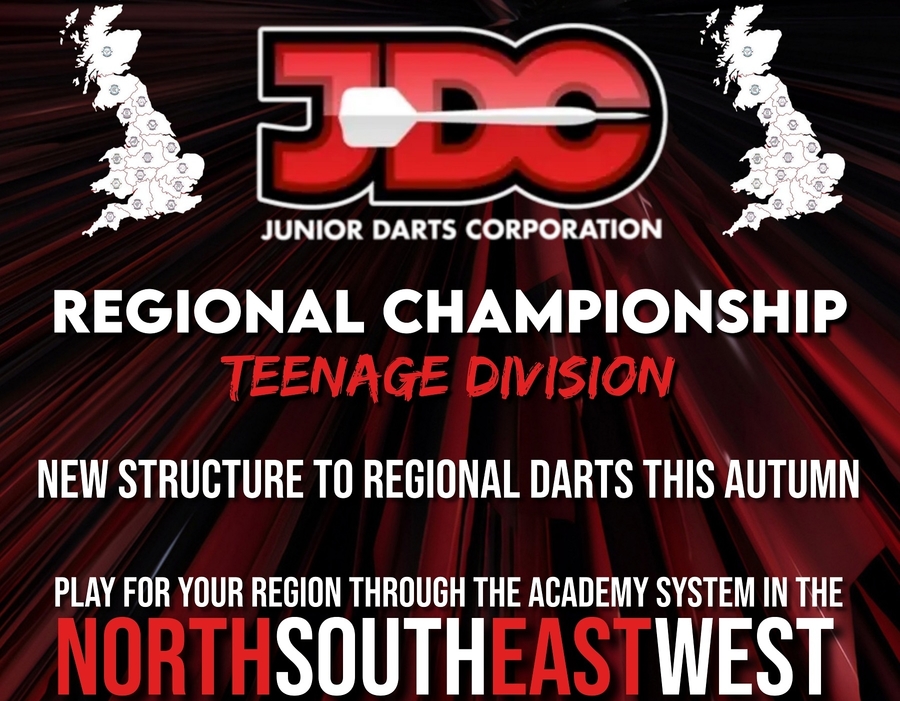 The JDC will be launching a brand new concept for young dart players to excel at a regional and local level in the Autumn of 2021. All young players will be able to qualify through the already wellestablished JDC academy system by attending local clubs and academies to have the chance torepresent their region in a team championships.

Players will shoot official scores on a weekly basis through the academy system within the 14 regions of England & Wales, and the top scorers across an academy season will represent their region as a team against fellow regions within their geographical area. Ultimately this will give players the experience of representing their local region and having theopportunity to play for their country at the JDC World Cup in Gibraltar. All this opportunity isavailable from their local academy each week.

The JDC is looking to allow players of these ages to experience team play, minimise travel and to express themselves with similar aged players.The teams will be made up from the academy system order of merit and each team will have a regional manager and one player will captain the team. Players will make the team on ability and will not be picked by a committee or board.

The regional matches will take place at the end of each academy season and the regions that play each other will be put into four strategic areas of the UK.Alongside the regional events players will also be playing for a place in the nation teams of England B and Wales B through the regional order of merit system. They will also be awarded a place in the JDC World Darts Championship finals in Gibraltar.

JDC Chairman Steve Brown commented,
“ I am very excited to launch this further opportunity for young players in their region of the UK. There has been a fragmented approach to young players playing for their locality over the years and nothing exclusively for them as under 18’s. We will look to develop the players in the team game as Juniors and Teenagers, as we recognise that even at this young age, players should be playing with similar aged players as a team. There will be 14 regions placed into 4 key areas of the UK and players within their academies will be working each week to get into their regional teams. With the support locally of academy coaches and regional directors, this will give a clear pathway for children to enjoy regional team darts”.

Further details to come on the JDC Regional Championship 21/22 season later this year with a
launch of the championships in the Autumn.