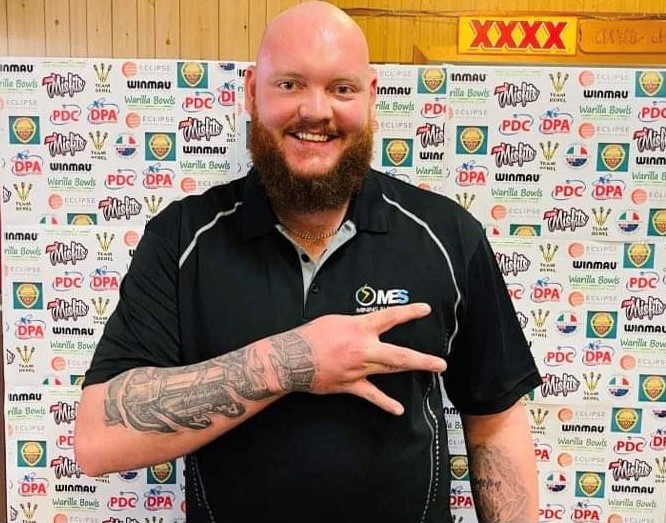 The sound of darts landing on Winmau dart boards was heard around Australia once more on Saturday as WA, Qld, Vic, and NSW all held events in the Winmau DPA 2021 Satellite Series. It was the second weekend for most states with WA finally able to kick off having been delayed by a February lockdown. In the end it would be double delight for Team Misfits with Tim Pusey and Robbie King securing event wins whilst Brendan Porter and Aaron Simpson also got the taste of event victory to savour.

In NSW the round of 16 wins went to Liam McLennan, Andrew Eagers, Peter Wilmott, Ben Clark, Mike Bonser, Mitchell Clegg, John Bunyard, and Brendan Porter. The quarters saw Eagers continue his form from event two as he clean swept McLennan. Peter Wilmott came close to doing the same over Clark, winning 4-1. The other two games went to final leg deciders as a match that has been played so often down the years in NSW went this time to Mitchell Clegg over Mike Bonser. The final quarter final saw local John Bunyard, who busted chasing 32 for the match, go out as Brendan Porter took his chance at 32 on his next visit to the oche to seal the win.

Porter then went on to take his semi in a much more comprehensive fashion against his colleague from Newcastle Mitchell Clegg. The winner of the last event in NSW, Clegg, could only win the third leg and thus lost 4-1. In his second semi-final appearance in succession, Eagers held throw but was unable to break the consistent Wilmott. In the final deciding leg the Team Danger man had six darts from 96 but was unable to convert and Wilmott finally secured a double ten for the win.

In the Final it was Wilmott who struck the initial blow by breaking Porter in the very first leg. Porter then broke straight back as Wilmott missed his chance to hold throw and left six. Despite busting chasing tops Porter was able to come back to the oche and hold throw in the third leg of the game. He then broke his opponent for a second time with a 17 dart leg. It was the critical leg of the match and was backed up by a 170 check out from Porter in leg five to move within a leg of the match. Another 17 dart leg against the throw and Porter had won five legs on the spin to secure the match five legs to one and take out Event 3 in NSW.

Further south and it was Dale Burton-Pye, Rhys Mathewson, Steve Duke, Aaron Simpson, Stuart Coburn, James Jackson, Lucas Cameron and Sam Ballinger who came away as winners from the final 16 in Victoria. The quarter finals saw Coburn clean sweep Jackson with Mathewson coming close to doing the same, defeating Burton-Pye 4-1. The other two matches went to deciding legs with Simpson breaking the Duke throw in that deciding leg to make the semis and Ballenger holding throw in 15 darts in the seventh leg to win a match where neither he nor Cameron had their throw broken.

The two semi finals both finished 4-1 as Mathewson lost an early break and could only come within one leg of his opponent after holding his throw at the second attempt. Simpson then opened with a maximum in the next leg and eventually held his own throw before breaking Mathewson a second time to take out the match. He would be facing off against Coburn in the final as the Team Rebel man split his semi final wide open by taking the first break of the game in the fourth leg in 13 darts to move one leg from the win. He then held his nerve as Ballinger could not take out tops to break back and Coburn threw 82 for the leg and put himself into another final.

As in NSW the Final was not a close affair, and the result exactly mirrored the NSW one, although how they got there differed. In this match Simpson broke the throw of his opponent in the first leg but Coburn responded by breaking straight back in 16 darts. Simpson then broke the Coburn throw for a second time in the match in leg three and this time backed it up by holding throw in 16 darts. He then opened the next leg with a 45 visit but still managed to win it in a total of 14 darts! Coburn hit a 140 to leave 66 in the next leg but he never returned to the oche as Simpson secured the required 48 for the match (5-1) and Event 3 in Victoria. As in NSW it meant three different players had won the three events down south.

Up north in Queensland another star studded field of 88 players competed in event three. The matches in the round of 16 saw wins for James Raroa (over Josh Kime), Robbie King (v Vanessa James), Brendan McCausland (against Riaan Englebrecht), Bill Aitken (over Tony Davy), Jackson Davies (v Ray O’Donnell), Jamie Rundle (conquering John Campbell), Raymond Smith (against Brendan Saunders) and Jeremy Fagg (over Ky Smith.) The quarters saw McCausland whitewash Aitken, Davies defeat Rundle, conceding only one more leg than McCausland, and King conceding two legs in his win over Josh Kime. To complete a total sweep of scorelines the last quarter went to a deciding leg. In that match it was Raymond Smith demonstrating all his experience as he broke Jeremy Fagg with a 14 dart leg, including a 92 check out to secure the final position in the semi final line up. The match had quite a few twists with Smith leading 2-0, Fagg coming back to move to within a leg of the match at 3-2, and Smith winning the final two legs to secure the 4-3 result. Of course it also meant that the father could claim the scalp of the man who had eliminated his son in the previous round.

Neither semi final was a close affair as Smith clean swept Jackson Davies 4-0 and McCausland only held his throw in the second leg (albeit in 13 darts) and thus lost 4-1 to his Team Misfits colleague Robbie King (indeed it would turn out to be quite a day for Team Misfits across both sides of the country.)

Remarkably the result in the Queensland Final replicated that of the two states south of them. Raymond Smith held his throw in the first leg but then Robbie King rattled off five straight legs to take out the match. He started by holding his throw in 15 darts before taking out 80 as Smith was unable to convert from a visit chasing tops. Sixteen darts later and King had held throw again and he then broke once the Smith throw once more, despite missing the bull finish with his 12th dart and then having to watch as his opponent missed by just eight in converting a 96 check out. King then led the sixth leg comfortably and took out the Final 5-1 to take out Event 3 in Queensland. As with the other states it meant a third winner was crowned across the three Queensland events.

A few hours later than the others (and a month later in terms of the competition) Western Australian players were able to finally visit the oche for the first time in the Winmau DPA Satellite Series. The winners from the round of 16 were Loz Ryder, Jordan Garland, Bill Gilla, Koha Kokiri, Adam Cameron, Tim Pusey, Gavin Horner and Lee Chapman. Kokiri then clean swept Gilla in their quarter final whilst both Chapman (over Horner) and Ryder (against Garland) only conceded one leg in their matches. The final quarter final went to a deciding leg as Pusey held throw, converting 60 with his opponent standing behind him needing only tops on the next visit for the break and the match.

Pusey then won his semi final against Chapman a little more comfortably, with breaks in the fourth and sixth legs of the match. Indeed that final sixth leg saw Pusey collect visits of 96, 140, 140 and a check out of 125 to take the leg in 12 darts. Chapman had collected his own break in the previous leg but could not stop the final onslaught from Pusey.

The other semi final saw a battle that has been played on many dart boards around Australia and this time it was Ryder who got the better of Kokiri. Koha actually broke the Ryder throw in the first leg (after The Warrior busted an attempt at 8) and then held throw to take a 2-0 lead. Ryder then won the next three legs straight to move within a leg of the match. Both players missed chances in what would turn out to be the final leg of the match before a double two secured the 4-2 win for Ryder.

The Final of Event 1 in WA was a battle of the veteran verses the young star and it was the next generation that took out the win in even clearer fashion than the other three state Finals. Tim Pusey comfortably held throw in the first leg before two 140 visits set him up to take the break in the second. He then comfortably held throw in the third leg and with his opponent Loz Ryder making a poor start in the next leg, Pusey was able to hold the lead throughout the leg and move to within 501 points of the match. Ryder started with a maximum in the fifth leg against a 41 visit from Pusey but despite a 100 follow up visit from The Warrior it was Team Misfit’s Pusey who would take out the leg and therefore secure a five nil win in the Final. He therefore became the tenth event winner, and the first winner of a WA event, in the Winmau DPA 2021 Satellite Series.

For full details on the DartPlayers Australia Tour, visit their website: https://www.dartplayersaustralia.com/