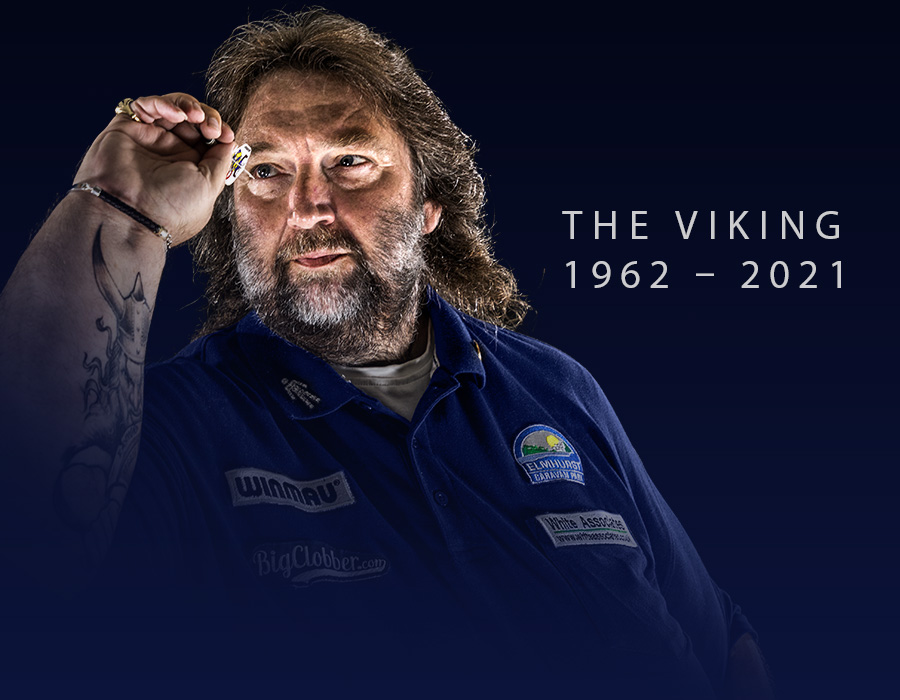 Andy ‘The Viking’ Fordham captured the hearts and minds of the darting World and beyond when he claimed the 2004 Lakeside World Championship Title, becoming one of the most loved characters in the game and a beacon for nice guys finishing first.

Poignantly Andy was speaking just several weeks ago about a potential return to darts that he was so looking forward too, and courtesy of Dartsworld we've taken he transcript below as it’s a super eulogy to the great man himself and the career that kick started darts modern revival.

“As soon as I sort my hernia out, I’ll hit the practice board hard and get myself ready. It should be a brilliant event”.

“I’m looking forward to seeing so many familiar faces again, especially the likes of Richie [Burnett] and Paul Lim - it’s been quite a while.

Back in our day, there were so many characters in the game. I guess a lot of that might be down to the fact we could just be ourselves, we weren’t worried about camera phones and everything we did being stuck up on social media. “Since my day, Darts has become very professional due to the huge amount of money  involved.

Players have to be extremely careful what they say and do away from the oche, a lot is often taken the wrong way. When I was a player we didn’t have to worry about the tiniest things ending up on the internet.”

When asked how the late, great Eric Bristow would approach the modern game, Fordham smiled and said, “He probably would have still been himself!”

In many people’s eyes, across all boundaries, Andy Fordham will always be a legendary figure in our sport and justifiably so. In his maiden television tournament appearance, he reached the semi-final of the 1995 BDO World Championships. A marvellous achievement for any debutant.

That year, it was Richie Burnett who halted his progress. Twelve months on, and it was Steve Beaton who stopped Fordham in his tracks, once again at the semi-final stage. When history repeated itself in 1999 and 2001, Fordham must have felt he was destined never to reach the final. He was already being touted in the media as ‘The Nearly Man’ and compared to Jimmy White, famously dubbed as the greatest snooker player to NOT win the World Championship.

Finally in 2004, the Viking broke his duck and went all the way, including one of the most famous fight backs in Lakeside history.

Fordham fondly recalls: “I was 4-2 down in a race to five sets against Barney thinking, ‘well, that’s five semi-finals you’ve reached Andy, a lot of people would love to be able to say that’. “After the break, because I had already resigned myself to defeat, I just relaxed and started playing decent darts. Then the closer I got to him, the more berserk the crowd went. I eventually won the match 5-4 and it has to be the best atmosphere I’ve ever played in front of.

“In the final against Merv [King], I probably got lucky as most of the crowd were on my side that day. I’d been consistently averaging 90+ all tournament, thankfully it continued, I played very well and got the win. It was a dream come true an amazing feeling and one I will never forget.

Not one to harbour any regrets, Fordham does often wonder what direction his darting life would have taken if he’d of switched to the PDC in his prime.

Despite Barry Hearn offering him the opportunity to jump ship after his 2004 World Championship victory, Fordham instead chose to stay with the BDO. A decision he muses over but amusingly justifies how it was probably the right call at the time.

Jokingly, Fordham said: “On one hand, if I had of moved over, the pressure would have been greater and I’d have probably drank more from nerves. That might have finished me off!

“When I did eventually switch over to the PDC in 2009, it was probably too late. I was on the road from recovery and my thinking was I’d play more matches and my game would return quicker.

“But upon reflection, it wasn’t the right time. I was far beyond my best and struggled badly.”

The Viking and the PDC did combine to produce a wonderfully memorable moment in 2015. Against all the odds Andy came through a tough qualifying event to claim a place at the Grand Slam of Darts. His entrance and performances -that 180 with his first 3 darts! - rank amongst the most emotional ever witnessed on the oche.

Looking ahead, he adds: “Once things return to normal, I’m excited to get back on the exhibition circuit. It will give me good practice for the Seniors event but I’ve plenty of time.

Nowadays, it’s a relaxing drive in the slow lane for Andy where the pace of life suits the Fordham family perfectly. With loving wife Jenny, their two children Raymond and Emily together with eight grand kids, it’s a more sedate journey from here on in.

Could the accelerator be pushed just once more?

All our thoughts are with Jenny and Andy's family at this terrible time as we reflect on one of darts greatest ever characters and genuinely beautiful people - RIP Andy "The Viking" Fordham.