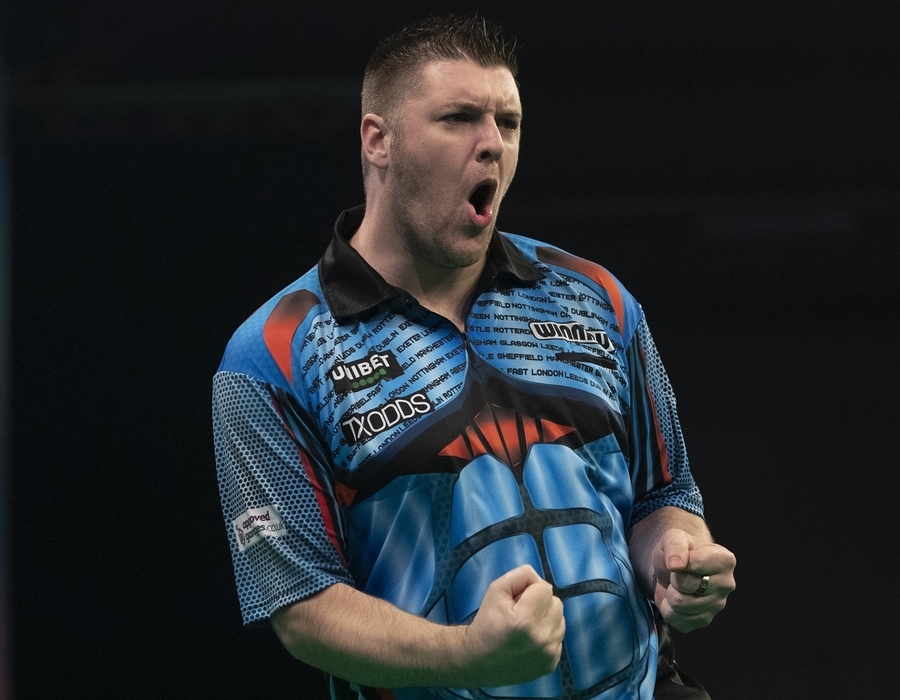 The battle to avoid elimination from the Unibet Premier League season continues on Thursday with Night Six at the M&S Bank Arena in Liverpool, where Stephen Bunting also makes a Challenger appearance.

The Northern Irish ace picked up a second draw of the Premier League season last week in Exeter, before enjoying a confidence-boosting run to the semi-finals of the UK Open over the weekend.

"I haven't given up on the Premier League yet," said Gurney. "I'm playing well, I'm still getting my confidence back and hopefully in Liverpool I can get two points.

"Glen's top of the Premier League and he's going to be refreshed. He had a bad draw in the UK Open against Peter and lost on Friday but it was a high-quality game.

"He'll be ready for Thursday but I've taken some confidence from the UK Open. In the last few weeks I've played really well, even in the Premier League. I'm still trying to look at the positives."

A win for Gurney would see him draw level on four points with Rob Cross ahead of the 2019 finalist's clash with Bunting later in the evening in Liverpool.

Cross took victory when the pair met in the UK Open on Saturday, continuing his recent return to form after first-game exits at the World Championship and The Masters.

"In the last two or three months I've changed everything, but I feel so much better for it and maybe my results haven't reflected that yet, but when it does click I believe I'm going to be better than ever," said Cross.

"It's getting there now  My practice game is absolutely lovely, I've probably just lacked a bit of confidence on stage or on the ProTour, coming out a little bit nervous."

Cross added: "It's going to be an amazing night. Stephen's Liverpool through and through and I've got to get on with my job. I believe I'll be good this week."

Luke Humphries became the first Challenger to win on the Premier League stage by defeating Gary Anderson in Exeter, and St Helens' Bunting is hoping to follow suit in front of his home appearance.

"Playing in Liverpool is a massive achievement in itself, and to be back in the Premier League shows how well my form's picked up over the last couple of years.

"This last year-and-a-half I've really stepped it up again. I'm putting the hours in, I'm loving the game again and I'm reaping the rewards and playing some of the best darts I've ever played."

St Helens' Michael Smith also gets the chance to star in his local arena this week, opening the event against Peter Wright as he bids to continue his strong recent form.

Smith hit a nine-darter against Gurney a fortnight ago in Dublin before seeing off Michael van Gerwen in Exeter, and the 2018 finalist has now won three successive games in a fine run.

"It's the happiest I've been playing darts," he admitted. "There's no pressure on me - I'm there to do a job and hopefully I can keep winning.

"I want to be competing in the Premier League all season so I want to make sure I get past the cut-off and then focus on the top four."

Van Gerwen takes on Gerwyn Price in another huge clash in Liverpool, with the pair having met in the final of the UK Open on Sunday in a contest which was edged by the Dutchman.

"When Gerwyn is on his game, he's a phenomenal player," said Van Gerwen. "He's going to win more tournaments in the future - it was my turn on Sunday.

"I had to work hard at the weekend and it gives me great confidence. I'm in good form and I want to continue this now. I feel hungry now and I want to win more."

Tickets for the Unibet Premier League's visit to the M&S Bank Arena in Liverpool are still available through mandsbankarena.com or by calling 0344 8000 400.