Van Gerwen Impressive Despite Falling to Defeat to Bully Boy 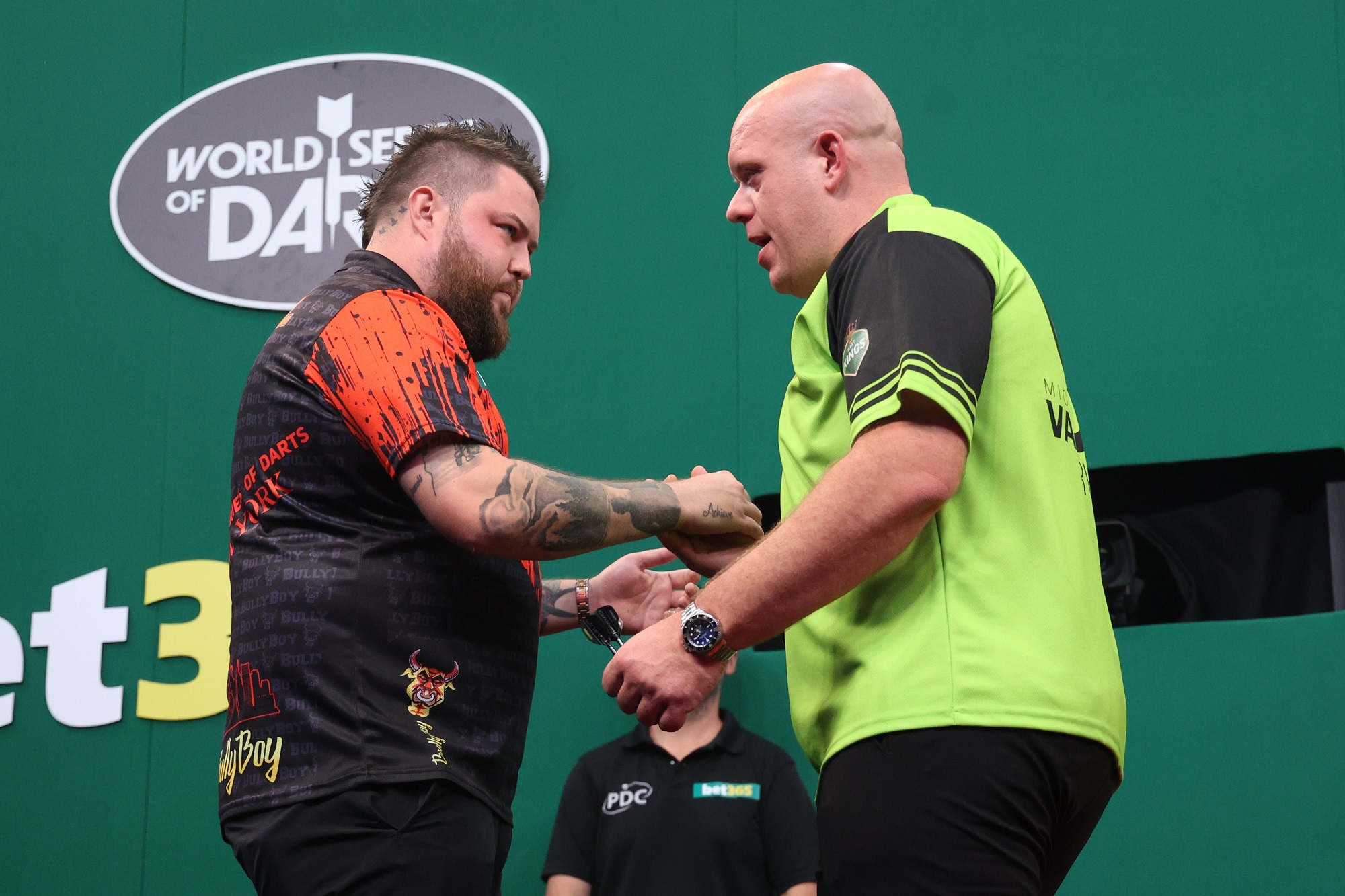 Van Gerwen Impressive Despite Falling to Defeat to Bully Boy

The US Darts Masters came to a close on Sunday morning UK time, with the likes of Michael van Gerwen and Peter Wright looking for their first titles in New York. It was however Michael Smith who struck gold in Madison Square Garden beating the Dutchman 8-4 in the Final with an average just shy of a ton.

Van Gerwen did manage victories over James Wade earlier on in the night, before hitting the highest average of any player in the US Darts Masters beating Gerwyn Price 8-4 in the Semi Finals including three 180s on stage.

The three-time world champion raced into a 5-0 lead in his Quarter Final with Aldershot born Wade, hitting double four with his first dart before his opponent found his first leg with his highest checkout of the match, hitting double ten with his last dart to reduce the deficit to 5-1.

The Winmau star found a 14 dart hold of throw in the seventh leg despite three missed darts at double, before an 11-dart break of throw hitting double eight with his second dart for 7-1. Mighty Mike checked out 85 on double fourteen in just two darts to seal an 8-3 victory over the Englishman.

Gerwyn Price was next for MVG in the States, and the Dutchman found the first break of throw in the fifth leg of the match hitting double five to finish 130 and lead 3-2 for the first time in the game. The man from Vlijman found a second break of throw on double six with his last dart to finish 72, going into the interval.

The 33-year-old who won the tournament back in 2017, reached the Final again in the twelfth leg hitting 52 on double ten with his last dart in hand to seal an 8-4 win on stage. Michael Smith will leave New York as a winner for the very first time in the PDC an achievement no other player has, after he beat the Dutchman 4-2 in the Final finding double thirteen for an 8-4 victory.

The game of the night came in the Quarter Finals as Jonny Clayton and Gerwyn Price faced off in a Red Dragon and all Welsh showdown in New York. The Iceman raced into a 3-0 lead finding tops with his last dart, to finish 72 and hold throw, before punishing his Welsh compatriot for his first missed dart at double in the match hitting 75 on double twelve for a fourteen darter.

The Markham darting star then found a 12 darter in the fifth leg to hold throw, finding a ton plus checkout on the bullseye as he finished 124. The Ferret desperately needed his first break of throw in America as he hit 56 in two darts on tops, as he trailed 5-2 going into the interval.

The former world champion treated the crowd to a maximum in the eleventh leg before checking out 39 on double twelve, as he went one away from victory. The all-Red Dragon affair treated the New York crowd to six maximums with three to each player.

The man from Pontyberem found his highest checkout in the match in the twelfth leg, hitting 101 in the corner of double twelve for 7-5 before breaking in the next leg, hitting double eight with his first dart. 47-year-old Clayton levelled on tops at 7-7 but fell short in a last leg decider to the World Number 2, as he hit 75 again this time on tops to clinch an 8-7 victory in Madison Square Garden.

Peter Wright returned to his World Championship and World Matchplay winning set of arrows: The Double World Champion SE Gold Plus darts as he reached the Semi Finals in New York. Snakebite played Leonard Gates fresh of his North American Championship victory which saw the American international qualify for the Ally Pally later this year.

The Soldier however fell short in the US Darts Masters as he lost 8-3 at the hands of the World Champion, with the Scotsman averaging 90.86 and hitting two maximums. He reeled of four legs on the spin a trait we saw to his game during his second World Championship victory, including a 62 checkout in the ninth leg to lead 6-3 before finding double eight on two separate occasions to win.

Gates missed a dart at double eighteen for a 150 checkout in the tenth leg after Wright had left the double eight from a 170 set up shot. His run would come to an end in the Semi Finals against Michael Smith as he lost 8-6, with Bully Boy hitting eight maximums and the world champion failing to find one in fourteen legs of darts.

A successful campaign in New York for the first time in the history of the PDC with many getting the experience of a lifetime in the Big Apple, and the action continues in eight days’ time for Premier League Finals night in Berlin for the likes of Jonny Clayton and Michael van Gerwen.

--Credits to Ed Mulholland/PDC for imagery --