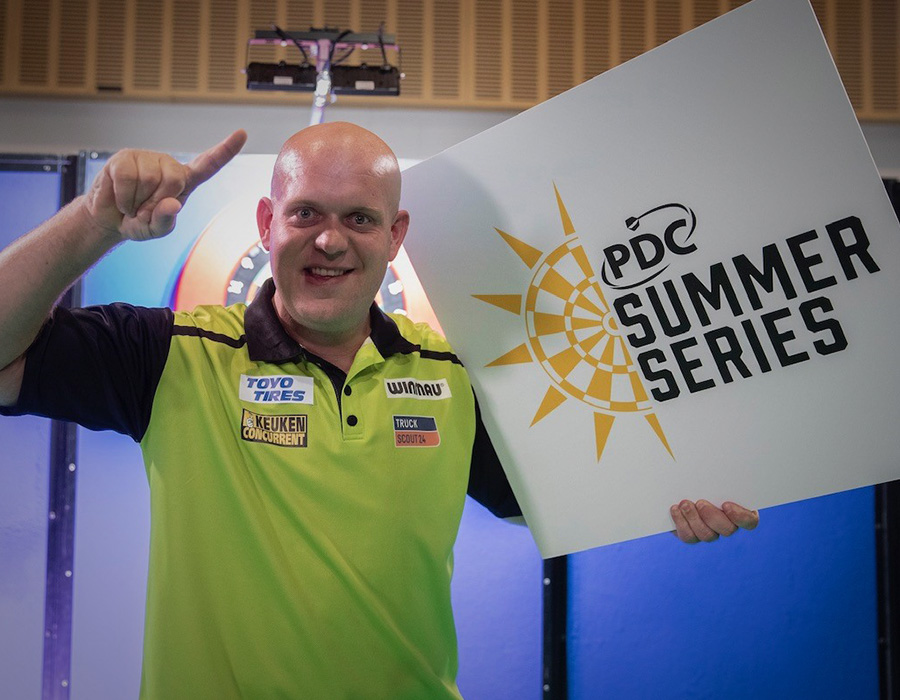 The world's top two players won through the 128-player field on the first of five days of action at the Marshall Arena to contest the final.

A thrilling contest saw Wright hit back from 5-2 down to move to the brink of victory with five straight legs, only for Van Gerwen to save the game before winning the deciding leg.

Victory for Van Gerwen earned the Dutchman his second title of 2020, after winning March's Ladbrokes UK Open, and a £10,000 first prize for an early lead on the PDC Summer Series Order of Merit.

"I'm very happy," said Van Gerwen. "It was a tough day and I had to perform really well but I worked hard and I did enough today.

"For the first tournament after this big gap, I think it wasn't too bad. I'm really glad to be back. I played some good darts but you never know what can happen - there's no easy games any more.

"It doesn't matter who you draw now, you have to be sharp otherwise they will beat you. It's been my biggest gap ever, four months is a long time to be away but I'm happy that I showed everyone today that I'm back."

The world number one opened with a convincing win over Ciaran Teehan, but had to battle hard against both William Borland and Callan Rydz - averaging over 105 in both ties and surviving a missed match dart from Borland in their deciding leg.

He then swept aside Jamie Hughes and Danny Noppert for the loss of just one leg, before averaging 107 in a 7-3 semi-final defeat of Gabriel Clemens.

Wright had take out 110 in the second leg of the final, but paid the price for twice missing darts to break throw as Van Gerwen edged into a 5-2 advantage with a break of his own.

Wright finished 116 as he broke back in leg nine before capitalising on missed doubles in two of the next three as he moved 7-5 up.

Van Gerwen, though, saved the final with a 72 finish, landed double two in leg 14 to force a decider and then defied a 180 from Wright - to leave 64 - by taking out 76 on tops for victory.

World Champion Wright, wearing glasses for the first time in competition, was also forced to work hard in reaching the final, particularly in his early wins over Ron Meulenkamp, Derk Telnekes and James Wilson.

He also saw off Premier League rivals Rob Cross and Glen Durrant - the latter with a 108 average - and defeated Krzysztof Ratajski 7-2 in the semi-finals with another superb display.

Poland's Ratajski had been bidding to win his second Players Championship title of 2020 as he reached a third semi-final of the year, while Clemens matched his best run of the year to take a further step towards qualification for the Betfred World Matchplay.

The tournament was the first of five days of action as the PDC's ranked Players Championship series returned in a secure "Bubble" at the Marshall Arena in Milton Keynes.