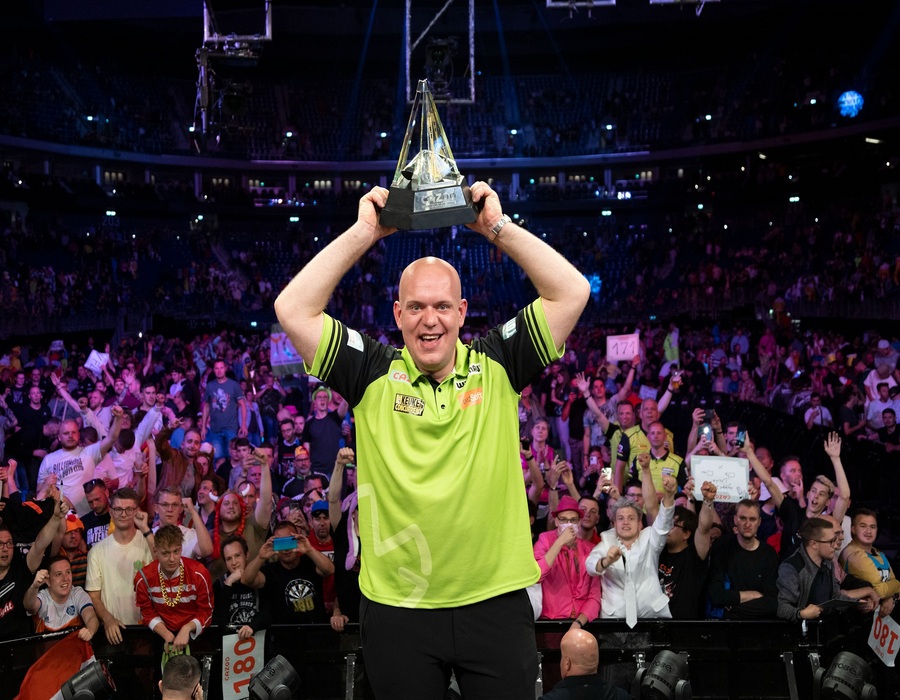 Michael van Gerwen edged out Joe Cullen in an epic final to clinch his sixth Cazoo Premier League title on an incredible night of action at the Mercedes-Benz Arena in Berlin on Monday.

Van Gerwen denied a heartbroken Cullen 11-10 in one of the greatest games to ever grace the Premier League stage, after the debutant missed a match dart at double 16 in a thrilling decider.

However, the Dutchman kept his cool to fire in a 13-darter and equal Phil Taylor’s haul of six Premier League titles, as he celebrates victory in a first PDC Premier event for over 18 months.

“I have been going through a really tough time, so to win this title means a lot to me,” reflected an emotional Van Gerwen, who eased past James Wade 10-4 in the semi-finals.

“I’m a happy man. Joe Cullen was phenomenal in that final. What a day. I’m over the moon.

“Of course I am going for more titles now. To have won this trophy here in Berlin is amazing.

“This last 18 months has hurt me. I know what I’m capable of, but this crowd in Germany today, they were absolutely sensational. I think they were a credit to the sport.”

Cullen drew first blood in the final with a sublime 11-dart hold, but after spurning three darts to break in leg two, he saw Van Gerwen seize the early initiative with a sequence of three straight legs.

The Yorkshireman responded with back-to-back legs to restore parity, only for Van Gerwen to restore his two-leg buffer at 5-3 courtesy of a 12-dart break.

Cullen reduced the arrears with a spectacular 141 finish in leg nine, and a clinical 114 checkout in leg 11 sparked a run of three straight legs for the Masters champion, who edged 7-6 ahead.

The next five legs went with throw, before Van Gerwen appeared to strike the decisive blow in leg 19, converting a sensational 92 kill to break throw in 12 darts and move one leg away from glory.

The drama continued as Cullen broke straight back in 13 darts to force a decider, but it was the Dutchman who claimed the spoils via double 14, having survived a match dart in the previous visit.

“Michael is a fantastic player and a fantastic champion, but I am absolutely gutted,” admitted Cullen, who was bidding to become the third successive debutant to be crowned Premier League champion.

“I cannot believe I’ve lost, but credit to Michael, he is a great guy and a wonderful champion.

“I think the second leg cost me, missing three at 32 for a break of throw. I’m absolutely devastated.”

Cullen stormed into a remarkable 6-0 lead against the reigning champion before closing out a resounding 10-4 victory, averaging almost 101 and crashing in 11 maximums – equalling the tournament record for 180s in a match.

In the second semi-final, Van Gerwen defeated 2009 champion Wade by the same scoreline to book his place in a record-equalling eighth Premier League showpiece.

The opening six legs of the last four contest were shared, but a blistering burst from Van Gerwen saw him win seven of the last eight to pull away from Wade and triumph with a 99 average and six 180s.

Van Gerwen - who now returns to the Netherlands for surgery on an arm injury - pockets £305,000 in total from the Premier League season, with three nightly wins earning him a £30,000 bonus in addition to the £275,000 top prize.