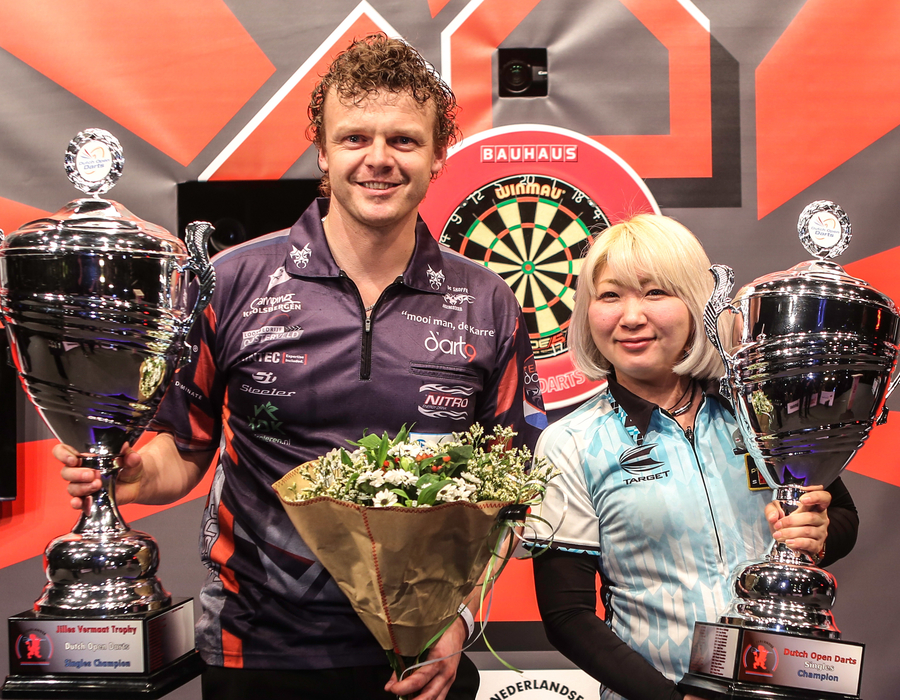 Richard Veenstra and Mikuru Suzuki are the 2019 BAUHAUS Dutch Open Darts champions. The Dutchmen won the final with a 3-2 victory over Ryan Hogarth, whilst Suzuki was too strong for Aileen de Graaf.

Richard Veenstra started the men's final superbly as he won the first set 3-0. In the second set he found himself 2-0 down, but also won that set with the assistance of a 158-finish. However, Hogarth didn't back down as he bounced back to win the third and fourth set, surviving two match darts in that fourth set. Veenstra bounced back again as he saved his best game in the last and deciding leg and crowned himself the new 2019 Dutch Open Darts champion.

Mikuru Suzuki, the reigning Lakeside champion, adds another BDO title to her ever-growing collection. She reached the Dutch Open final and faced Alieneed De Graaf. Suzuki proved why she is the best female player at the moment winning 5-2.

Pairs Finals
Earlier that day, Suzuki played the women’s pairs final as well. Together with Yuriko Yamaguchi, she played reigning champions Lorraine Winstanley and Corrine Hammond. The Japanese duo whitewashed them with a 4-0 victory.

The men’s pairs final was a thriller. After three legs, Justin van Tergouw and Martijn Kleermaker took a 3-0 lead, but after eight legs the score was level again at 4-4. Berry van Peer and Gino Vos then took the last and deciding leg to lift the trophy.

The new 2019 Dutch Open u18 is Daan Bastiaansen. The young boy from Breda was too strong for James Beeton from England in the final, winning 4-2. Pim van Bijnen, another Dutch talent, lifted the boys u14 trophy. He whitewashed Daan Beernink 3-0. The girls tournament was won by Layla Brussel. She won the final with a 3-1 victory over Rosanne van der Velde.