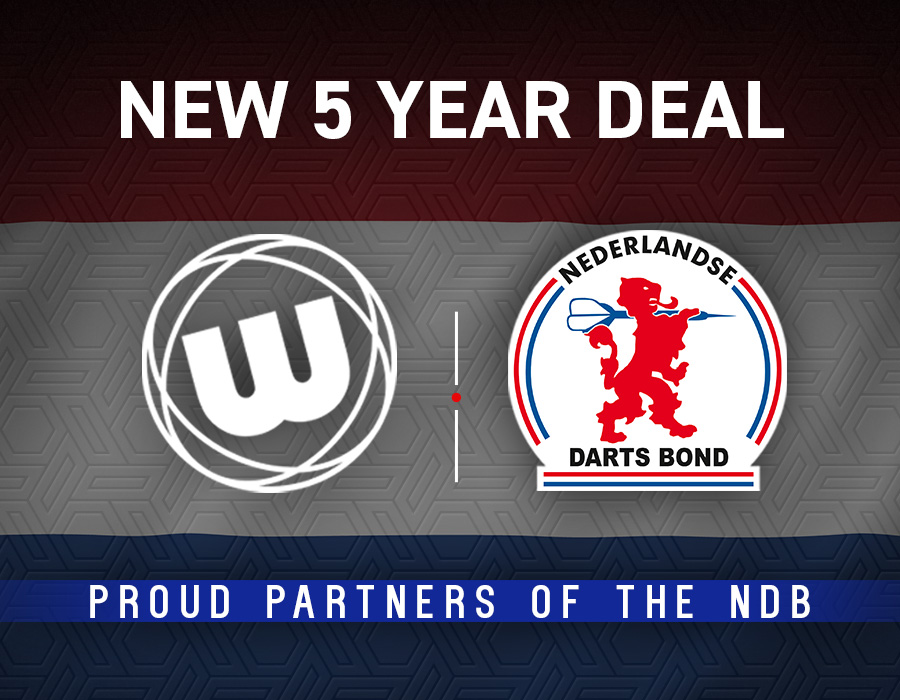 The Dutch Darts Association (NDB) and Winmau will extend their relationship a further 5-years that sees the partner’s relationship cover over 2 decades.

The Dutch Darts Association (NDB) and Winmau will extend their relationship a further 5-years that sees the partner’s relationship cover over 2 decades, where together they have worked to develop and engage the talents that lie within the Benelux region.

This grass roots approach has seen both organisations engage with millions of players ranging from the youngest to the most seasoned players and professionals.

Announcing an extension of this partnership is essentially an extension of a superb relationship that signals the continued ambitions of both companies specifically in the area of grass root talents and pathways for all dart players to improve.

This latest 5 year extension was agreed having come out of an extremely frustrating Covid period that saw the NDB and their passionate team see event cancellation after event cancellation with many false dawns for darts to re-start, and Paul Engelbertink director of the NDB said "Everyone knows that Winmau is the world’s leading darts brand, but what is most impressive is their commitment to every player in the world no matter what level they play at, and ability to understand how the sport is really growing. Having Winmau at our backs has no doubt seen us come out even stronger through this very tough covid period, and this new 5-year extension allows us to offer some really exciting  events from the NDB to get players back out enjoying a competitive game".

Simon Hall, Director of Marketing for Winmau said "The Dutch open was always seen as THE biggest event of the year in the sheer numbers of players alone, nothing can prepare you for the players, the passion and the celebration of darts that the Dutch Open is and how it creates the entire heartbeat of the NDB and in many ways the WDF itself. They boast starting off so many of the world’s best players like Michael van Gerwen, Raymond van Barneveld, Vincent van Der Voort and new exciting talents like Danny Noppert and Dirk van Duijvenbode but what is more impressive is the crop of talent they have coming year after year and it’s this shared passion for darts that makes us the most natural of partners in growing the sport".

Paul Engelbertink jovially added "We were first with Winmau helping show the PDC the way! Joking aside it was amazing news to see the Blade 6 endorsed by the PDC. It is also great to see that Winmau supports the WDF and the Lakeside. Our next Major, The Dutch Open is scheduled for June 10th - 12th 2022 at the Bonte Wever, Assen with the Blade 6 featuring centre stage".

With the winds of change so strong in World Darts as the sport emerges from a transformative covid period both the companies share a vision to keep connecting players the world over, from front rooms and pubs to the World’s biggest stages, and Simon Hall added " Having the NDB endorse us and the Blade 6 is the highest accolade that we can have and as great friends we look forward to the next 5 years together. The NDB are one of the most professional, forward-thinking partners that we work with, and the sport is in amazing hands with them. They never stop looking at ways to improve and put the players at the heart of everything they do. They organise the biggest and best Open tournament, the Dutch Open and we are happy to be part of that. We are lucky to be working so closely with the NDB team and have no doubt that the future of Dutch darts is very bright.”

For full details on the NDB check out:     https://www.ndbdarts.nl/