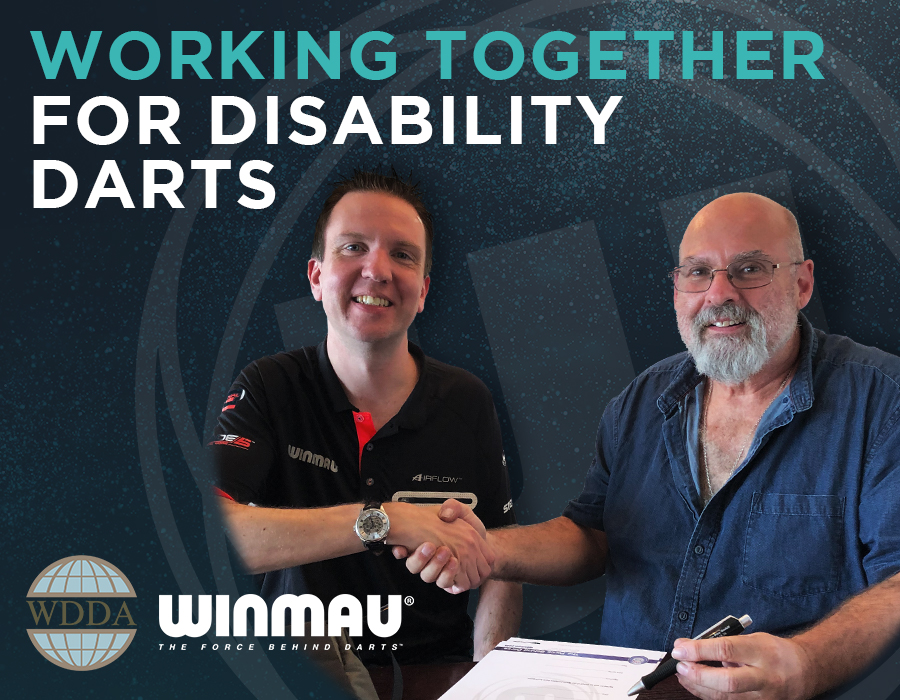 Winmau, the world’s leading darts brand, has announced it is to extend it's sponsorship of the World Disability Darts Association (WDDA) to over 10 years after signing a new deal that takes the two organisations to 2025.

Formed in 2013, the WDDA currently comprises 12 affiliate countries with players numbering in their thousands. That number is growing all the time as more of the 80 World Darts Federation (WDF) affiliates nominate disability darts organisations.

“Our mission is for the global family of disability darts to grow and grow,” says Russ Strobel, whose successful seven-year campaign to have a wheelchair-friendly dartboard height recognised by the WDF led to the organisation’s creation.

Flexibility is key to the WDDA’s success. It's events cater for players with differing levels of disability with two wheelchair categories – for those with lower body impairment and both upper and lower body impairment. In addition, the standing category caters for amputee players and those who need medical equipment or aids to throw their darts.

“We’re very proud of the success of the WDDA,” says Russ “But without Winmau’s support, things would look a lot different. The company has been with us since the beginning in 2006 when we first started campaigning. Over the years it has sponsored players and events and helped countries starting out by providing equipment, advice and guidance. Integrity is everything when it comes to living with a disability and Winmau has it in spades. Having the prestige and backing of the largest name in the global game has meant everything.”

Ian Flack, Winmau’s Sales and Marketing Director, adds: “Russ and the WDDA have worked tirelessly to provide more opportunities and to raise the profile of the disability side of the sport. My proudest moment in 20 years working in the industry was seeing the inaugural WDDA Winmau World Masters tournament staged in 2014, and the WDDA has made great strides since then to create an increasingly global platform for the players. Russ is an inspiration and to have continually fought to put disability darts on the map the way he has is true testament to his caring and determined nature. We are all very grateful and hope that we have contributed to the WDDA’s aim of knocking down barriers and ensuring its players are recognised for the talented sportsmen and women they are.”