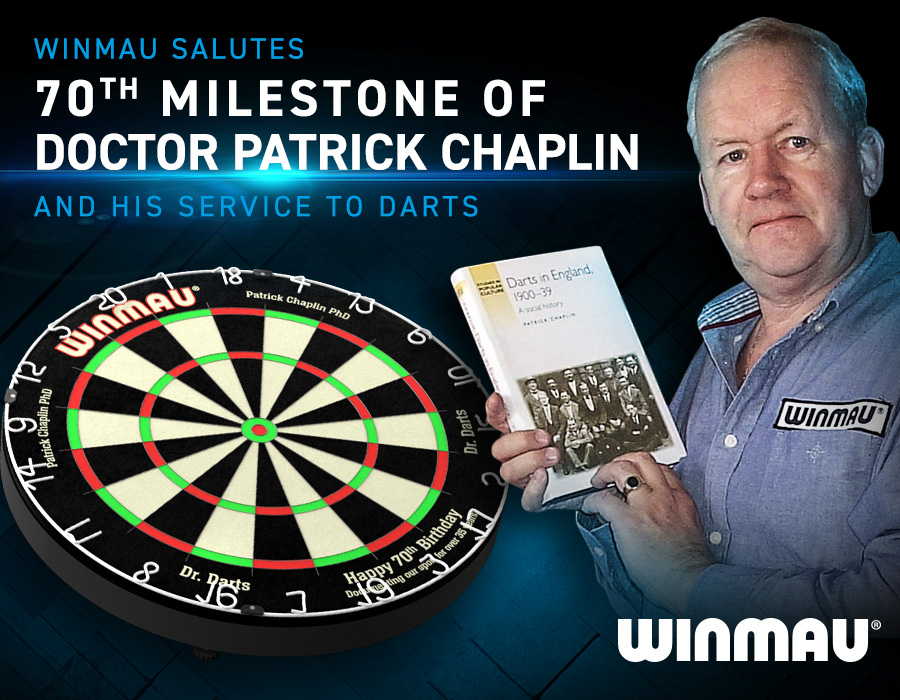 Patrick started his first ever Dr. Darts Newsletter (DDN) back in 2010 namely to answer the question as to why and how he ever became involved in researching darts from close friend Eddie Norman that spurred this burning desire.

Dr. Edward Norman wrote whilst speaking at a lecture on darts: "I told the audience about your PhD in Darts. They were fascinated and loved it but, Patrick, I was stuck when I was asked, why you chose darts? leaving me stuck for the first time ever at a lecture".

Patrick’s love of creative writing was a gift to all of us seriously interested in the sport’s origins and its founding fathers of whose shoulders we stand upon, when he came up with the idea of producing a (more or less) monthly newsletter to amuse and inform fellow team members and others about what the Club was all about or had been up to. Amazingly the first issue appeared in September 1980, which would have made Patrick a pioneer blogger decades before the digital bubble exploded.

Patrick said: "I served as editor, main contributor, cartoonist and publisher of Out of the Blue – The Official Bullsheet of the Blue Boar (Maldon) Men’s Darts Club - as at the time there was a dearth of books on darts history so anything I published in that respect was usually ‘borrowed’ from Derek Brown’s The Guinness Book of Darts (Enfield: Guinness Superlatives, 1980). Derek’s book was probably the only darts book I had in my possession at that time. The Bullsheet lasted for thirty-two issues, the final one being published in May 1988".

It was as a result of including historical notes in the Bullsheet (as the newsletter was more popularly known) that Patrick started to research the sport. It happened like that… and more than 35 years on, a PhD and eight dart books later here he is still researching darts!

Patrick’s DDN circulates across the globe reaching over 120 countries; and remains free with a global readership measured in thousands. Patrick attributes much of this success to Dr. Eddie Norman and his travels across the world on the lecture circuit and his mentions of his work, his books and DDN.

Ian Flack, Sales and Marketing Director for Winmau, said: "We've had a very special working relationship with Patrick and I have personally known him for 20 years. His quest to uncover the fascinating history of the sport in so many different areas is admirable and I am proud to call him and his wife Maureen friends. Happy birthday Mate."

Vincent Bluck, Managing Director of Winmau, added: "Patrick and the DDN are unique and his features about darts history remind us how lucky we all are to have Patrick safeguarding the history of our amazing sport. Patrick’s work will be his legacy as the only man in the world (so far) to research and discover the true history of one of the most popular pastimes. On behalf of Winmau and the wider darting world we'd love to wish him the best 70th birthday marked by this truly special limited-edition one-off dartboard in honour of his services to us all - Happy Birthday Dr. Darts”.