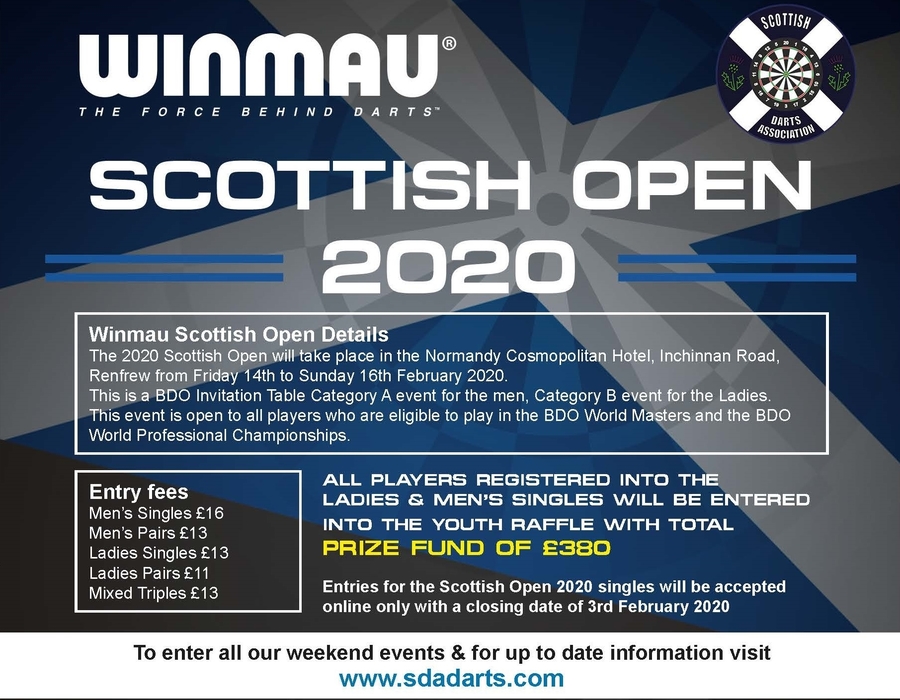 This is a BDO Invitation Table Category A event for the men, Category B event for the Ladies. This event is open to all players who are eligible to play in the World Masters and the World Professional Championships.

The Scottish Darts Association are inviting players to enter the annual Scottish darts-fest that is the Scottish Open.  This is one of the hardest open tournaments to win as illustrated by the events history showing only two players that have ever won the men’s title twice, Robbie Green, in 2011 and 2014 and the defending champion Wesley Harms who previously won in 2013.

The Scottish Open was first contested in 1983, held on the same weekend as the World Cup in Edinburgh and was won by 23 year old Australian star Russell Stewart who defeated his fellow Australian Terry O’Dea in the final.  The ladies title went to Pat Connaughton from England who defeated Welsh ladies team captain Sandra Lee in the final.

The tournament was then moth-balled for twelve years and revived in 1995 when England’s Chris Mason took the title along with ladies singles champion Deta Hedman, who currently leads the way in the Ladies Open with five titles.

Others to watch out for include Anastasia Dobromyslova with four wins and Lorraine Winstanley with three titles.  Ann Kirk has been Scotland’s sole victor in the Ladies event winning twice in1996 and 1999.

Fallon Sherrock has been in four out of the last five ladies finals and would love to finally take the title.

This year’s event will kick off on the Friday night with the traditional ice-breaker tournament, the Mixed Triples, followed by two sessions of Singles play on the Saturday and finishing on the Sunday with the Open Doubles competitions.

The Mens winner will take away £3000 while the Ladies champion wins £1000 and of course valuable ranking points can be accrued to take into the Ranking Tables.

The current champions are Wesley Harms from the Netherlands and England’s Lisa Ashton.  Winning duo in the mens pairs were Diogo Portela & Cody Harris while the ladies champions were Deta Hedman and Beau Greaves.

Visit the SDA Website (sdaentry.com) to enter on line or download the tournament flyer to check full entry details and check out the accommodation offers from the venue.  Entry fee will be £16 for the Mens Open Singles and £13 for the Ladies Open Singles.