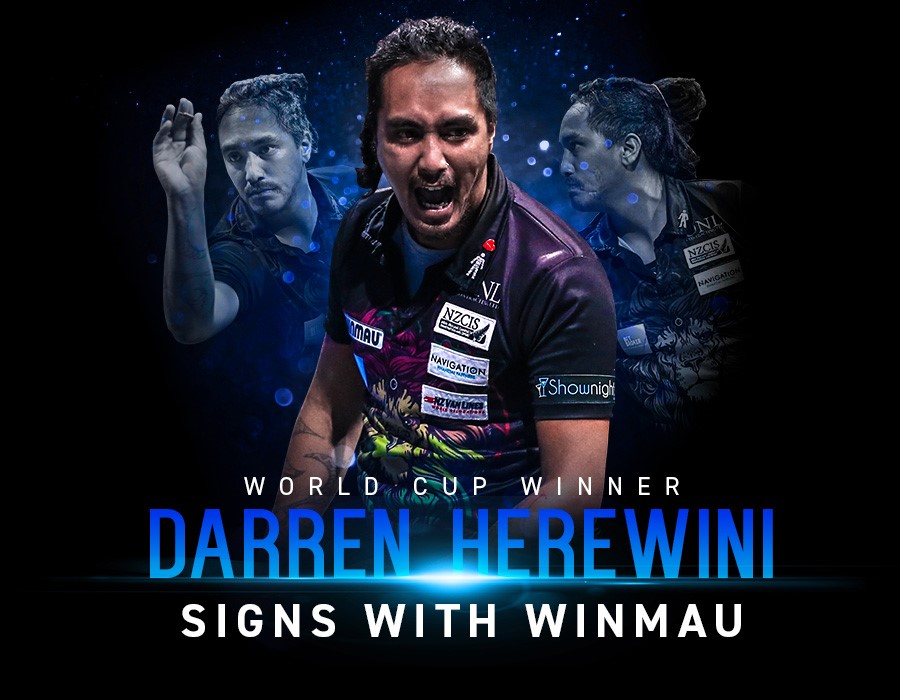 World Cup Singles winning sensation Darren “Apocalypse” Herewini has signed with Winmau following his emphatic launch onto the global darts scene, after his tremendous World Cup win in Romania - taking the final 7-6 in a field of the WDF’s top 32 players.

The 28 year old Kiwi has only played top-level competitive darts for around 3 years, but his talent was legendary back home in New Zealand where the young Herewini would impress all that saw him at whatever competitions with his focus, composure and technically beautiful throw.

It wasn’t long before Herewini was shooting up the rankings of the New Zealand dart scene and soon came to the fore on national TV several times. Darren qualified for the 2017 PDC World Series in Auckland where he shot to national fame playing the then dominant Phil Taylor in what was a brilliant game of darts. The experience set Herewini on a new path and journey towards becoming a World class tour professional.

Herewini has since continued to dominate the fiercely competitive New Zealand darts tour, with no less than 5 major New Zealand titles in 2019 alone, also qualifying for the BDO World Professional Championships at the O2 in London where he won his first game in fine style, and even more fans the World over.

Ian Flack, Sales and Marketing Director, said “For a such talented, home-grown New Zealander to join us at WInmau is very special as we have always been aware of the passion and talent in Oceania region. So for the reigning WDF World Champion and New Zealand ranked no.1 to sign with us now demonstrates just how serious we are about the global darts tour.”

Darren Herewini said “Everything’s moved so quickly in the last year. It’s hard to think how far I’ve come especially in joining the World’s largest darts brand, but I know that I’m at the very start of my journey and have so much to achieve, having Winmau back me is a huge boost for my confidence.”

Herewini has captured much praise from experts and pundits in the media for both his tremendous stage presence, bottle under pressure, technical ability but above all his outstanding character post-match win or lose.

Paul Nicholson said “Darren’s throw is unbelievable and seems, without micro-analysis, to be technically perfect and if he works hard and continues to play in top ranked events, he will soon become a household name in darts.”

After failing to secure his Tour Card at notoriously cut-throat PDC Q-school this year Darren will continue to play his darts on multiple World tours, very much with his eye on becoming one of the top ranked global players, and New Zealand’s most famous ever darts player.