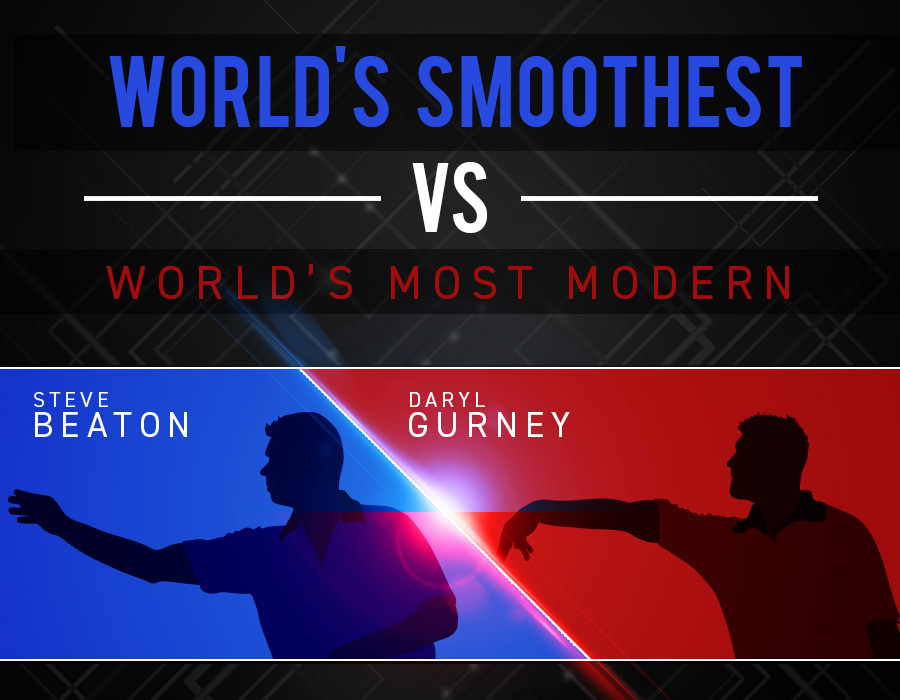 With Daryl Gurney continuing his journey with Winmau for another five years, we thought we’d take a look at his ultra-modern throw against the smoothest in the World from Steve Beaton, who recently threw a scintillating 9-dart finish on the European Tour.

Daryl has a superb approach to the dartboard, making sure he can see exactly what he’s aiming at long before he takes his stance at the oche, this sets him up target ready - immediately. His eyes are focused on the exact point he’s aiming at, where he wastes no time in raising the dart to its load position.

Steve floats his way into the oche, where he takes a relatively central position, with a very relaxed and comfortable looking stance, where he already knows to throw, and simply lets his arm flow with very little conscious effort. Steve’s longer backswing and soft grip help him maintain his silky, to-die-for rhythm. With one of the games shortest backswings, Daryl has set himself up with one of the most compact modern throws in world darts, where he's only using forward momentum in his throw.

This technical aspect sets Daryl apart as very unique, and is a very modern way of playing the game. As soon as his dart is released he has moved to take the next dart and is ready to go, almost before the previous dart has the landed in the board, allowing him to get into a superb high scoring flow. This "Flow" is vital to understand, for you to get into autopilot on your throw and how you naturally achieve higher peaks in your game.

Daryl’s release and throw are not as hard as you'd expect with such a short throw. He uses a smooth acceleration that allows him to fight the darts on a smooth curve. Paying attention to this "flight" can help players improve, as the more direct the line to the board the harder you need to throw.

Whilst Steve’s throw is languid by comparison, it is by no means a slow throw as Steve reels off the darts in pretty rapid succession.

What we can learn from these throws is that both world class players have clearly identified and made their throw unique to them and their physical characteristics. Both players have many superb principles in common that you can apply to your game. These are: Superb setup, posture and alignment that allows either player to find their natural rhythm under the most intense pressure.

Stephen Feeney – SightRIght global coach specialist said: “Im looking at both throws from a pure accuracy point of view, both players are giving themselves almost the perfect look at the target they wish to hit, making them two of the most exciting throws to watch and learn from in the accuracy area”.