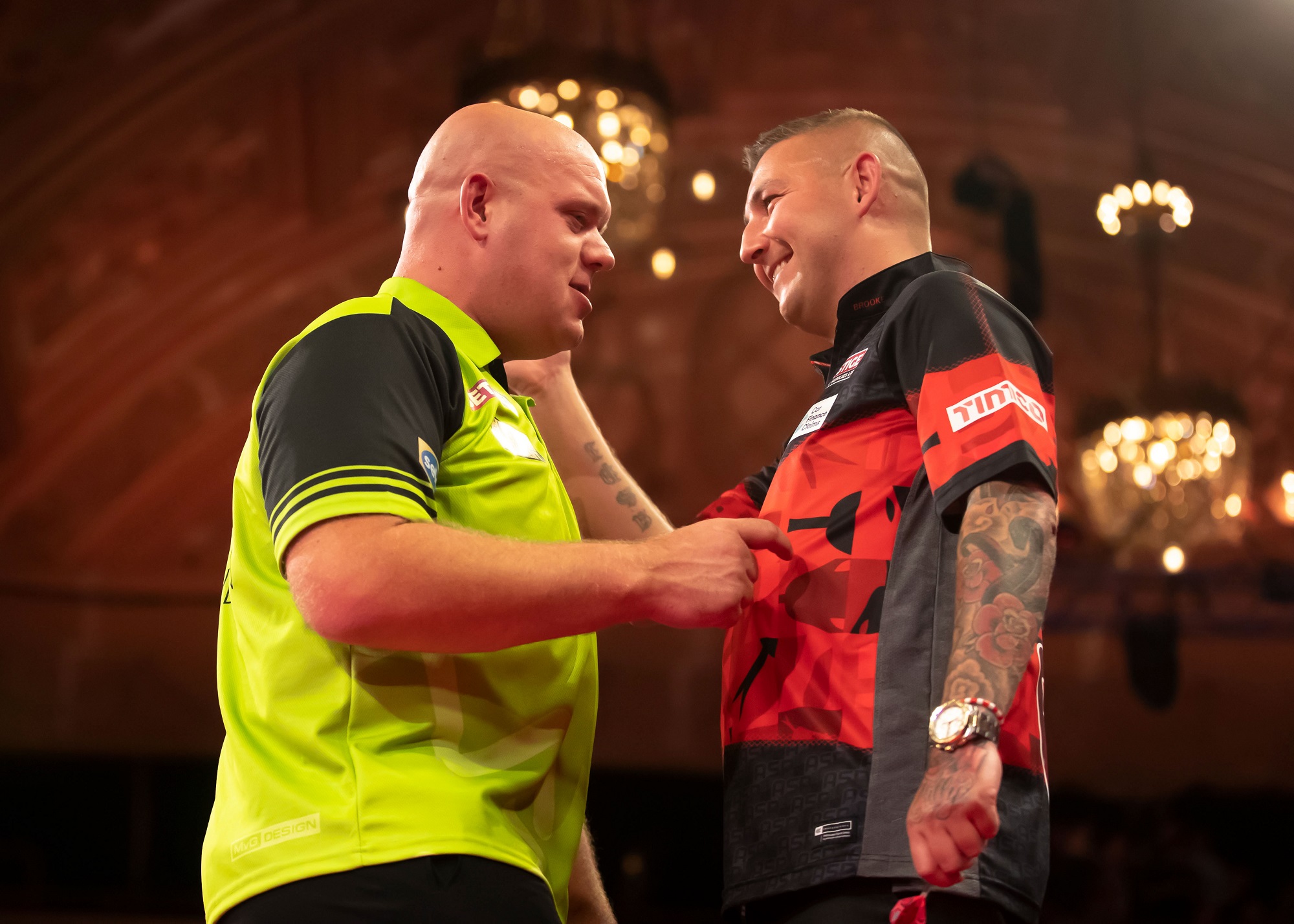 Michael van Gerwen overcame the Winter Gardens crowd by beating Nathan Aspinall in the Quarter Finals of the Betfred World Matchplay, winning 16-14 and closing out with a fantastic 146 checkout on double thirteen to end the comeback of the Asp. The 2-time Matchplay champion included twelve 180s and averaged an impressive 101.86 over thirty legs of arrows.

Reigning Champion Peter Wright exited the tournament in the opening match of the night, losing 16-14 to 2020 champion Dimitri van den Bergh who averaged 102.01 and hit eleven maximums over the course of the tungsten tussle.

Mighty Mike who hasn’t lifted the Phil Taylor trophy since 2016 after going back-to-back, held his initiative in the opening session of the match holding throw three times to lead 3-2, hitting double sixteen with his last dart for the fifth leg.

The Winmau man began to kick on in the Quarter Final hitting tops with his second dart for the first break of throw, entering a 5-3 lead in Blackpool. The Dutchman left at the second interval 7-3 ahead thanks to double ten with his last dart, breaking his opponent for the second time in the match.

The reigning Premier League champion then found consecutive 12 darters on the oche, firstly holding throw by hitting double eight with his last dart for 9-4. He then followed with his third break of throw in the match, hitting double ten to finish 97 and lead 10-4 dealing the former UK Open champion another crushing blow.

However, the Englishman has shown many over his years as a darts player that he is not one for quitting, finding a 106 finish on double sixteen for his fifth leg of the match. Aspinall then broke for the first time in the next leg hitting double four with his last dart to finish 65 and go within four of his opponent.

The Asp went into the fourth break of the match 12-8 down after he found tops with his second dart, as he won the session 4-1 in a very impressive showing having been put on the back foot heavily by his opponent.

The Stockport thrower found back-to-back ton plus checkouts to continue what was turning out to be a fantastic comeback, firstly finding tops for a 117 finish despite requiring regrips, which in darts can be costly as it disrupts the rhythm when going for a finish and in particular a double.

The highest finish of the match was hit in the fourteenth leg as Aspinall found two treble nineteens and the bullseye for a 164 finish, celebrated by the fans in the Winter Gardens who were certainly treated to a classic Matchplay Quarter Final.

Van Gerwen went one away from victory on double four to finish 68, only for the non-seeded man to pin the bull for a 90 check out after his second 106 finish of the match in the 26th leg.

The three-time World Champion silenced the hate he received towards the end after missing darts at double twelve for the match, by hitting double thirteen to complete a 146 finish and claim a 16-14 victory as he reached his sixth Matchplay Semi Final where he will face Dimitri van den Bergh.

The Belgian struggled early in the opening Quarter Final of the night, with World Number 1 Peter Wright finding two ton plus checkouts in the first mini session leaving the stage 4-1 ahead. Snakebite hit the bull to complete a 129-checkout breaking throw before finding his fourth leg in a row, hitting tops with his second dart to finish 100.

From then on it would be one way territory, with all the threat coming from the World Number 9 who found his first break of throw on double eight in the eighth leg of the match, going within two of his opponent.

The dancing darting star continued causing problems for the reigning World Champion, hitting double four punishing three missed darts from his opponent to level the match at 5-5. Two treble to double combinations gave Van den Bergh an 8-5 lead, hitting double eighteen for a 76 finish and then double eight for 82 with his last dart in hand.

The Dream Maker was certainly in dream land on the famous oche as he reeled ten legs on the spin against the best player in the sport according to rankings, hitting double sixteen to finish 35 punishing the Scotsman for more missed darts at double.

The Red Dragon star ended the rot with a fantastic 140 finish in the seventeenth leg, hitting two double tops to give the Blackpool faithful something to cheer about. The first Quarter Final of the night included nineteen maximums with Dimitri hitting eleven as well as 36 140s in the Winter Gardens.

The World Number 1 levelled at 12-12 with a 104 finish on tops before breaking on double sixteen, finishing 89 and leading 13-12 in what was a fantastic comeback from the reigning Matchplay champion.

However, it was to be the 2020 champions night, firstly finding his highest checkout of the match in the twenty sixth leg hitting double eighteen with his second dart to finish 96. The Antwerp born thrower hit double sixteen to close out the Quarter Final in the 30th leg, finishing 44 and reaching his third consecutive Matchplay Semi Final on Saturday night.

What a night with two blockbuster Quarter Finals and there is still two more to come on Friday, firstly Gerwyn Price who looks to reach his first Semi Final at the Winter Gardens as he faces Jose de Sousa. An all Dutch Last 8 tie between Dirk van Duijvenbode and Danny Noppert is the other instalment as both look to reach the Semis in Blackpoll for the first time in their darting careers.