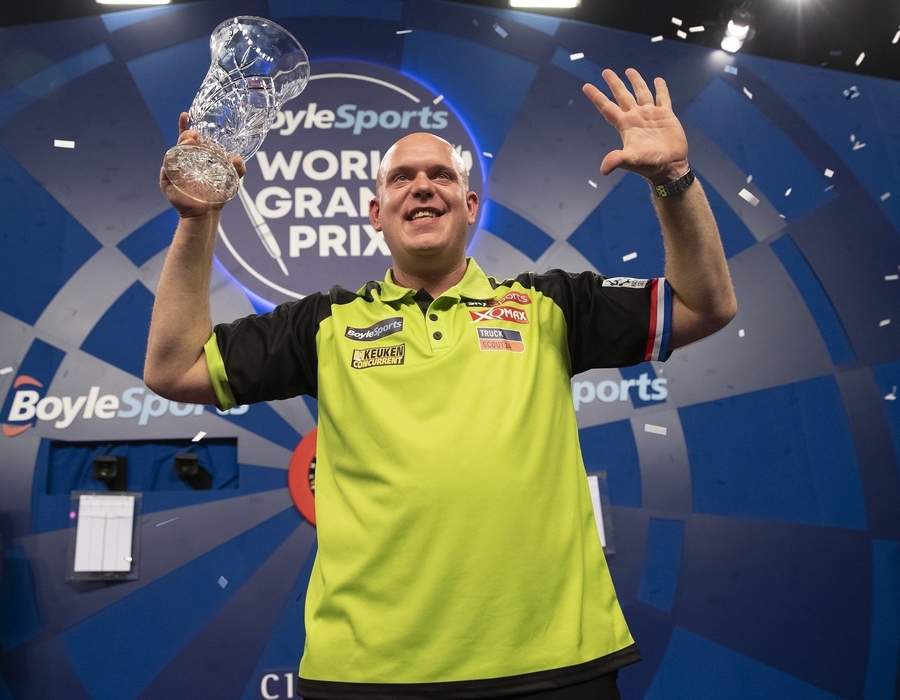 The 2020 BoyleSports World Grand Prix begins at the Ricoh Arena in Coventry on Tuesday as 32 of the world's top stars compete in the prestigious double-start event.

Five-time champion Michael van Gerwen will begin his title defence on the opening night against Krzysztof Ratajski as the tournament - traditionally held in Dublin - takes place across seven nights from October 6-12.

Aiming to win his third successive World Grand Prix title, Van Gerwen comes into the tricky tie with Polish number one Ratajski under pressure to arrest a slump in form.

The Dutchman, the 17/4 pre-tournament favourite with sponsors BoyleSports, has been knocked out in the last 16 of the past two televised knockout events and also failed to reach the Premier League Play-Offs for the first time in August.

"I feel good. Of course it could be better, in the last few months I've had too many ups and downs and you need to get past that," admitted Van Gerwen.

"It's not always that easy but you have to fight hard, work hard and put a lot of effort into your game, and that's what I do.

"I think the World Grand Prix is a tournament that suits me, of course the first round is always dangerous, whoever you play, but I feel comfortable.

"With Krzysztof Ratajski to play against, it's not an easy one but I think it counts even more for him."

The tournament will begin with a meeting between 2010 runner-up Adrian Lewis and 2019 semi-finalist Chris Dobey, while the pick of the first round ties will also be played on Tuesday as 2016 runner-up Gary Anderson takes on fifth seed Rob Cross.

Night two will see two of the world's in-form stars, Peter Wright at Gerwyn Price, enter the fray against Ryan Joyce and Jermaine Wattimena respectively as the first round concludes.

World Champion Wright, who was visibly distraught on stage after losing the 2018 final to Van Gerwen, begins his quest for a first World Grand Prix crown against Joyce, a winner at the PDC Summer Series in July.

"Preparation is everything with this tournament, it's very difficult so you've got to be ready for it," explained Wright, the 11/2 third favourite with BoyleSports.

"I started practicing my doubles in July in preparation.

"I've got a tough first game against Ryan. He's won a ProTour event and done well before at the World Championship so he's a handy player.

"I'm always nervous for the first round because it's a short distance match so let's see what happens."

Third seed Gerwyn Price, who enjoyed a glittering September with victory at the World Series of Darts Finals and in two PDC Autumn Series events, is targeting a fourth TV title as he bids to become world number one.

"You need to be on your game all the way through or you will struggle to get off at the start of legs," said Price, BoyleSports' 5/1 second favourite.

"As long as my doubles are going in and I score as well as I have been doing then I'm going to be a tough player to beat.

"I don't really look at other players. I know that if I bring my 'A-game' then nine times out of ten I'm going to win.

"I've made no secret about the fact I want to be world number one and I believe I can do that within the next year or two.

"Hopefully I can win one of the big TV events before the end of the year and then go on to win the World Championship."

All first round ties will be played over a best of three sets, with three legs needed to win a set.

The first round winners will return to the stage on October 8-9 for the second round, before the quarter-finals are held on Saturday October 10. The semi-finals will take place on Sunday October 11 and the final on Monday October 12.

The tournament will be broadcast live on Sky Sports, as well as through the PDC's international broadcast partners including RTL7 and DAZN and for PDCTV Rest of the World Subscribers.

First Round - Best of three sets

Second Round - Best of five sets

All sets are the best of five legs.

All games will be double start and double finish, meaning players must first hit a double before they can begin scoring in each leg.

There is no tie-break; should a game progress to a final set, the fifth leg of the set would be the deciding leg.

Odds courtesy boylesports.com and correct at time of publication.