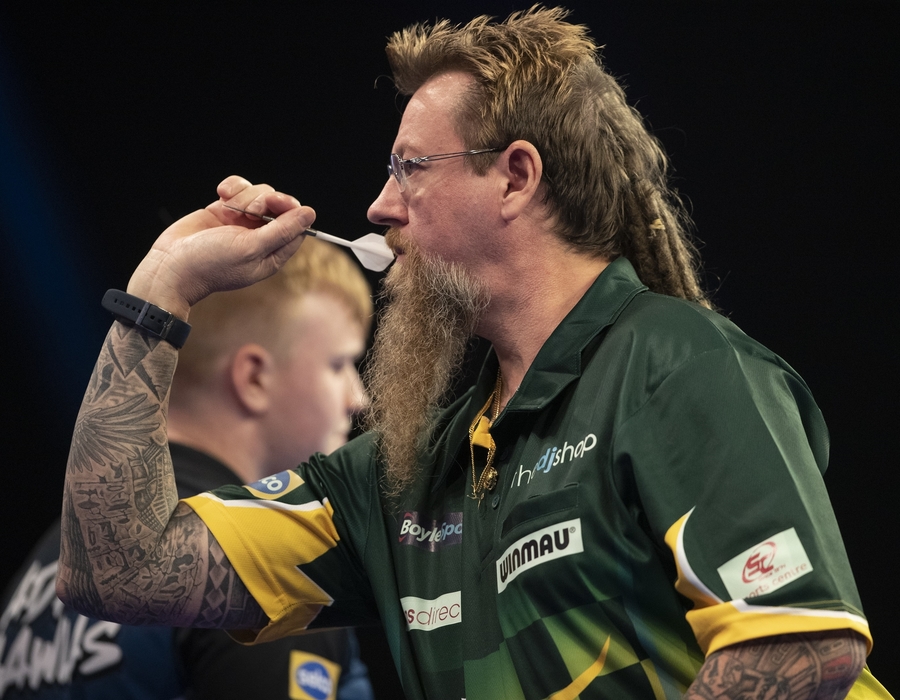 Simon Whitlock came from 4-0 down against Adam Gawlas with an outstanding scoring performance to complete his 100% record at the group stage and secure Group B top spot.

The Wizard of Oz experienced double trouble as he missed twelve darts at double in the first four legs, but the Australian’s scoring ensured that he could mount a fantastic comeback hitting 7 180s.

Gary Anderson was among four players to secure their place in the knockout stage of the 2020 BoyleSports Grand Slam of Darts on Wednesday in Coventry.

Anderson, Damon Heta, Nathan Aspinall and Rob Cross all won qualification shoot-outs at the Ricoh Arena, as the final group matches took place in Groups B, D, F and H.

Anderson defied a 102.06 average from Searle, taking out 119 on the bullseye in the deciding leg to seal his passage through to the last 16.

"If that bullseye hadn't gone in I think I would've been going home tonight," said Anderson, who maintained his record of having won through the group stage in every year of the Grand Slam.

"The pain in my leg is getting to me, but I'm going to have to battle through the rest of the year.

"This is one of my favourite tournaments so I'm pleased to be through and hopefully I can go far."

The Scot will now meet world number one Michael van Gerwen in the last 16, with the Dutchman assured of his qualification at the top of Group A going into his third group match on Thursday.

Emerging Australian Heta kept his debut campaign alive as he came through a tense last-leg decider against Jermaine Wattimena to win 5-4.

The former Brisbane Darts Masters champion survived three match darts from Wattimena before taking his chance on double ten to reach the last 16.

"It was nervy game, I was on edge," said Heta. "It was a strange one to play in because I've had breakfast with Jermaine every day this week.

"I'm not here just to make up the numbers. I've got a good life in Australia so I'm here to do some serious damage."

Aspinall made it through the group stage for the first time with a convincing 5-1 win over Ricky Evans in their decider.

"I felt flat the first two games so tonight I gave it a bit extra to get myself going," Aspinall explained.

"He missed a few doubles but I got the win and I'm happy to get through. It was a big day for me today because I've never got through the group stage before."

Cross produced his best display of the group stage to defeat Luke Humphries 5-3 in their Group D decider.

The former World Champion maintains his record of making it through the group stage in each of his four appearances in the tournament.

"Fair play to Luke, I thought he played great and on another day he might've beaten me," Cross admitted.

"I love the game as much as the day I turned up really. It's been a busy schedule but that's not a bad thing."

Dave Chisnall completed Group D with a third successive victory as he overcame Justin Pipe 5-2 to progress to the last 16 in unbeaten form.

James Wade secured top spot in Group F, finishing five doubles from nine attempts in a 5-2 win over Glen Durrant, meaning that the Premier League champion exits this year's event without a victory.

Dimitri Van den Bergh missed double 12 for a nine-darter for a second time as he complete a brilliant Group H treble by defeating BDO Champion Wayne Warren 5-1, averaging 104 in another superb performance.

Thursday will see the final games take place in Groups A, C, E and G, with the top two players making it through to the knockout stage.