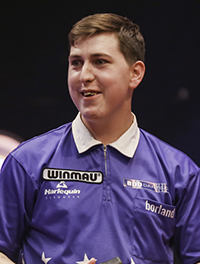 Twenty-one year old Borland from East Calder, West Lothian, demolished 13th seed Conan Whitehead 6-1 with an average of 91.86. The win, the biggest of his career, follows recent victories in the Edinburgh Darts Association (EDA) in which he is the reigning League Singles Champion and Grand Prix Singles Champion. He has also hit a competition nine-dart leg and is the defending Scottish Masters champion.

Under the terms of his sponsorship, Borland will represent Winmau at tournaments and events and will contribute to the company’s development of world-leading darts equipment.

“William is a prodigious talent,” says Ian Flack, Winmau’s Sales and Marketing Director. “His TV debut was amazing, but no real surprise to anyone that has followed his career so far. I am sure he is destined for the top and I’m excited that Winmau will be with him every inch of the way.”

Borland added: “The BDO World Trophy has given me a real taste for what the sport can offer. I am still learning and have a long way to go, but with Winmau’s support I am looking to build upon my successes to date and realise my dream of being a successful professional darts player.”

For details of the Winmau range in Scotland, please contact Darts Scotland via telephone 07517 258759 or email dartsscotland@gmx.co.uk