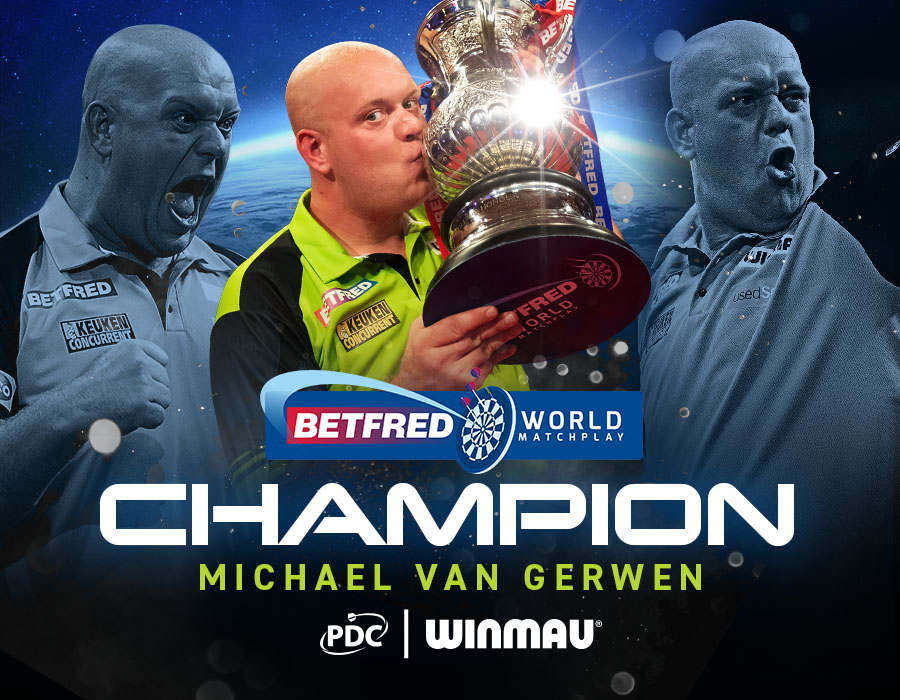 Michael van Gerwen won the last five legs to beat Gerwyn Price in the Final of the Betfred World Matchplay, finishing 121 on the bull to win his third Phil Taylor trophy in the Winter Gardens.

After winning the Premier League last month, the rampant Dutchman continued into Blackpool improving game by game and certainly saving his best arrows for the Final, including fifteen maximums and a 101.19 average claiming £200,000 for his fantastic campaign.

It was the Welshman who raced out of the blocks finding a checkout of 101 on tops to break throw in the second leg, entering a 2-0 lead having opened with a hold on the same double. Mighty Mike struggled early on the outer ring missing eight darts at double, as the Red Dragon star hit tops again going 4-0 up this time finishing 70.

Despite all the misses on the outer ring, MVG came one dart away from a nine darter, an accomplishment his opponent only achieved yesterday. The Green Machine completed a 10 dart hold on double six to get off the mark but trailed 4-1 at the first interval.

The three-time World Champion clicked into gear, including a 160 checkout on tops too break the World Number 1’s throw for the first time in the match but failed to capitalise in the eighth leg.

The double troubles returned as another six were missed by the former back-to-back Matchplay champion, with the Iceman hitting tops finishing 58 to break straight back restoring his two-leg cushion. The 37-year-old included nine maximums of his own and averaged 96.92 over the course of the match, recording a double percentage of 42.42% in the iconic venue.

The Markham man again found a purple patch in the Final and broke in the fourteenth leg, hitting double nine to take a 9-5 lead after his opponent showboated, finding a bull obstructed by another dart to finish 82, a fantastic arrow from van Gerwen.

The Dutchman found finishes of 97 on tops in the sixteenth leg and an important ton plus checkout, finishing 140 on double ten just to hold his throw making the score 10-8. As the Final developed, the form on the outer ring developed from the Vlijmen man which mixed with his fantastic scoring ability, started rattling his opponent and sensing the comeback was on.

The Iceman couldn’t keep his cool missing darts at double himself in the twenty third leg, allowing a crucial break from the five-time Grand Slam champion before levelling the match on double sixteen at 12-12.

A real battle of wits as four consecutive holds of throw with a 90 check out from the Winmau man on double eighteen, made the Final all square at 13-13 before Price found tops with his second dart for a one leg lead once more in Blackpool.

The new World Number 3 then showed why he has won everything the PDC has to throw at him, winning five consecutive legs including three ton plus checkouts. Double five to finish 130 broke the Red Dragon stars throw, allowing MVG to take the initiative a position he hadn’t been in on the oche taking a 15-14 lead.

A 114 checkout on tops put Mighty Mike within one off victory at 17-14, before a champagne 121 finish on the bullseye sealed a third Phil Taylor trophy, ending a long six year wait for the Dutchman.

What a year having won twice on the Euro Tour, the Premier League and now the Matchplay, and remember he required surgery to his throwing hand last month. The best player all year in the PDC and surely the man to beat going into the remainder of the darting calendar, after being ruled out of the World Championship back in December due to Covid. What a comeback from Mighty Michael van Gerwen.