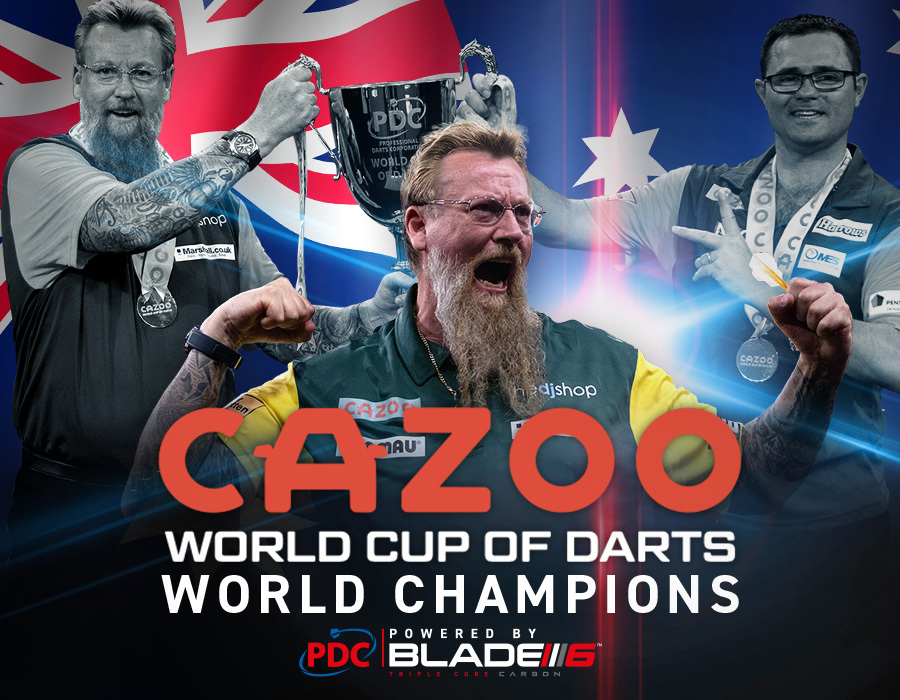 It has been an historic weekend for the Australian duo Simon Whitlock and Damon Heta. They succeeded in lifting the World Cup trophy for the first time, with a 3-1 victory over the 2020 World Cup Champions Wales.

Australia have come close to conquering the World of Darts back in 2012, when Whitlock took his adopted Aussie brother, Paul Nicholson to the final against England. However, they were unable to cross the line in a heart-breaking 4-3 defeat.

Whitlock, who is one of only four players to play in all 12 editions of the World Cup was fired up and ready to put everything on the line for his country, alongside fellow Australian
and partner Damon Heta.

Australia's World Cup was anything but ‘a breeze in the park’ as Australia saw the likes of five-time semi-finalists Belgium and top seeds England, before stepping onto the stage with 2020 World Cup Champions Jonny Clayton and Gerwyn Price in the finals.

“It is life-changing. I have dreamt about this moment my entire life and I’ve finally got there,” said an emotional Whitlock, one of four World Cup ever-presents.

“It feels amazing. I had a great partner. Damon has been amazing. He’s a great friend, and he’s the best player on the planet right now. He is going to be the next world champion.”

Heta gave Australia the early impetus in the final with a stunning whitewash win over a below-par Price, before Whitlock put the fifth seeds on the brink of history after battling past Clayton 4-2.

Whitlock struck the decisive blow with a sublime 120 finish to break throw in leg five, and despite missing six match darts at tops, the 53-year-old eventually closed it out at the seventh attempt to double their lead.

The 2012 runners-up had the momentum and continued their charge by opening up a two-leg buffer in the Doubles contest, but Price and Clayton produced a stirring fightback to prolong the drama.

The Welsh pair responded with legs of 15, 14 and 13 darts to force a final leg, only for Whitlock to miss a dart at double 18 for the title, and Clayton capitalised via double eight to clinch the Pairs match and reduce the arrears to 2-1.

Clayton then had the opportunity to set up a grandstand finale between Whitlock and Price, but Heta had other ideas, producing a nerveless display in the biggest game of his life.

The 34-year-old averaged 99 and crashed in two 180s to fend off the former Premier League champion, pinning his favourite double 16 to spark jubilant celebrations from the Australian duo.

“Simon dragged me through the beginning,” admitted Heta, who defeated three of the world’s top eight on Sunday evening.

“I’m stoked for Simon and stoked for Australia with all the support we’ve had back home.

“Everything we are sacrificing being here and we’ve got the title in the bag. It’s an amazing feeling.”

After Heta was beaten by his Belgian housemate Van den Bergh in the opening rubber, Whitlock preserved their hopes with a 4-3 win over Huybrechts, averaging 101 in the process.

The Aussies then underlined their credentials in the Doubles decider, averaging 109 and rattling in legs of 11 and 12 darts midway through the contest to progress.

In the semi-finals, Heta recovered from 3-1 adrift to stun England’s Michael Smith, after the St Helen’s star burst 72 for a 4-1 success, while a rampant Whitlock whitewashed James Wade with a 103 average to complete the job.

Price and Clayton fell short in their pursuit of a second World Cup triumph, despite denying hosts Germany and four-time winners Netherlands to seal their spot in Sunday’s showpiece.

Price set the tone for the 2020 World Champions earlier in the day, posting the second highest individual average in World Cup history during his four-leg blitz of Martin Schindler.

The 37-year-old averaged 117.88, landed a ten-dart leg and converted a stunning 170 checkout to whitewash Schindler, before Clayton eased past German number one Gabriel Clemens 4-2 to seal the deal.

The second seeds then dispatched Dutch duo Danny Noppert and Dirk van Duijvenbode in the semi-finals, with Price closing out a 4-1 win over UK Open champion Noppert in the opening tie.

Clayton later came out on top in a high-quality affair against Van Duijvenbode, defying four 180s and legs of 11 and 12 darts from the Dutchman to complete successive Singles victories.

The Premier League duo were bidding to become the first side in World Cup history to recover from 2-0 down in the final to scoop the title, but they were unable to create another slice of history at the Eissporthalle.

“We weren’t at our best in the final but Simon and Damon played fantastic,” said Price, featuring in his second final in three years.

“I said at the beginning of the tournament we’d play Australia in the final, but I predicted that we would win, so I was wrong there!

“We didn’t fire tonight, but we’ll be back and we will be stronger next year.”

Netherlands’ new-look pairing of Noppert and Van Duijvenbode recorded successive Singles wins over Northern Ireland’s Daryl Gurney and Brendan Dolan to reach their first World Cup semi-final since 2019, only for Wales to curtail their title tilt.