How can you learn from Michael Van Gerwen’s success? 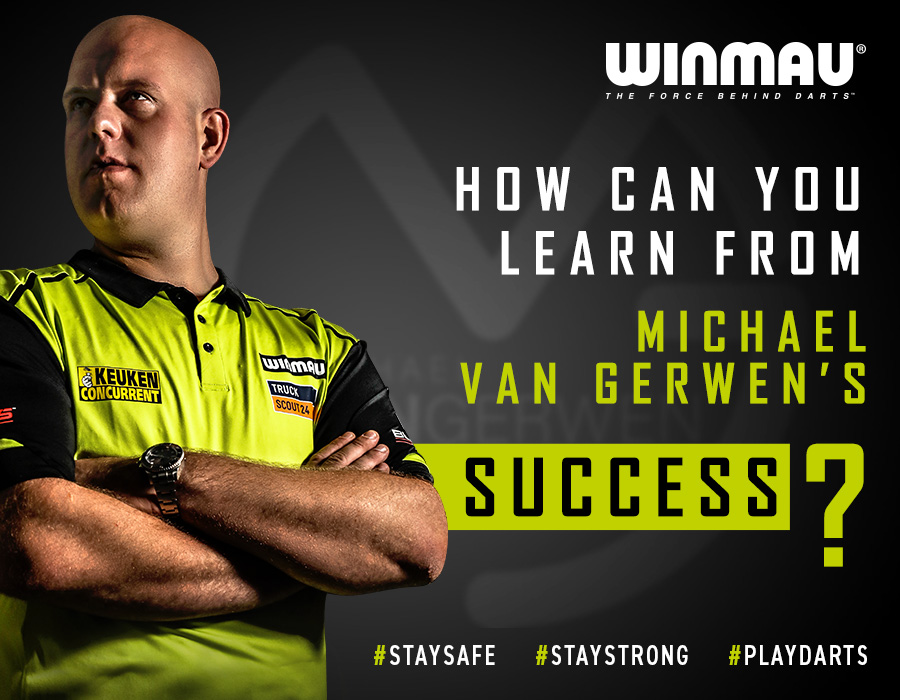 How can you learn from Michael Van Gerwen’s success?

MICHAEL van Gerwen admits that developing a “ruthless streak” was a major factor in his rise to glory.

The three-times World Champion delivered a massive statement by switching to Winmau on January 2 this year in an exclusive occasion at the Principality Stadium, Cardiff.

It has not been the year that anyone could imagine. That Stadium is now a temporary hospital and sport has been in lockdown since mid-March due to the coronavirus pandemic.

But that hasn’t stopped MVG calculating and fine tuning his game back home in Boxtel, Netherlands.

Van Gerwen is now a father for a second time, the lovely Daphne giving birth to a baby boy two months ago, and he’s enjoying that quality family time with an extended paternity leave from the sport.

With his characteristic board smile and sleek strong head Michael now 31, is very different to the young outlandish prodigy who just a few years ago couldn't win a major. Whilst many who know MVG as very playful and always smiling, his often thoughtful responses always contain a different message, that Better Never Stops, and it’s hard earned.

Coming off the back of a long season, that saw heartbreak with his loss to Peter Wright in the World Championship final, Van Gerwen was up at 7am the next day to be received in Cardiff for his latest brand signing.

THE UNIQUE NATURE OF FITTING MVG

Winmau's Production Director Lee Huxtable, has worked with the best dart players in the world day in, day out.

He plays an integral role in completing weekly fittings for PDC Tour players looking to gain that fractional advantage that perfect feel gives them, and it is this unique ability that draws top pro's to Winmau in having this prestige level service as a key competitive weapon.

Huxtable added: “It all comes down to the player. We are never looking to fix something that's not broken.

“Michael had so many ideas about his new darts that we literally went back to the drawing board, and created nearly 20 new options for him to try.

“However, such is Michael’s amazing knowledge of how darts will really feel under pressure he took no time discarding set after set, even though whatever dart thrown seemed to rip the treble twenty apart time after time”.

Van Gerwen added: “I need my new darts to work this week, but getting fitted means we have to look at every option to really see what's going on as it may just be a set up issue not a dart change that’s needed.

“By getting the exact profile right first we then worked on several new options that adjusted the darts flight to reduce my spin.”

Huxtable continued: “We have to take every player and build each set on a case-by-case basis, and let’s just say Michael’s demands to get the perfect set to allow him to win certainly put us through our paces.”

His latest darts are modelled extremely closely around the Authentic range that give other players the nearest experience to throwing like MvG, and he went on to say: “I've come across enough successful players to know that the best, work the hardest. To fulfil your potential you have to do the same thing. And for those who are lucky enough to be born with a gift and choose to work with dedication, that's the combination.”

Having burst on to the scene as a child prodigy it wasn't easy for Van Gerwen to accept his success early on and often found himself questioning why had this ability been given to him?

He said: “I felt a bit selfish to be a winner. Which is exactly what you need in darts. It just took me a while to be comfortable with winning but what helped was realising how much my fans loved seeing me win. So if other people are happy for me winning, then why can I not be?

“Darts has allowed me to be competitive in life and I've developed a bit of a ruthless streak playing darts over the last few years.

“I'm not afraid of the losing, however badly it goes, it really stings and reminds me to try and never to make that same mistake again."

5 Tips for what can you take from Michael’s dedication to the game?

1. Perfect the set up

Michael used to have a habit of getting offline as a youngster and in fixing his set-up position allowed him to become a consistent winning machine. Try very slow motion back and through darts throws to see the true line of your dart aim.

Great Rhythm is something Michael has always had from a young age, and has been extremely careful never to mess with it. His throw has a start and a beautiful finish with no bits and pieces inn-between. See your throw as one movement not separate pieces.

Another area Michael has perfected is the transition. The shoulder stabilises the throw so make sure it stays stable as you smoothly accelerate forward.

Michael’s trademark is his sublime extension and throw finish showing perfect balance and power. That can't happen without a lot of good things happening in your throw first, so stick your finish.

A few years ago Michael found that his mind was wandering halfway through many games. Identifying that this was linked to focus and stamina Michael got himself ready for the dip, so find your weakness and make it a strength.