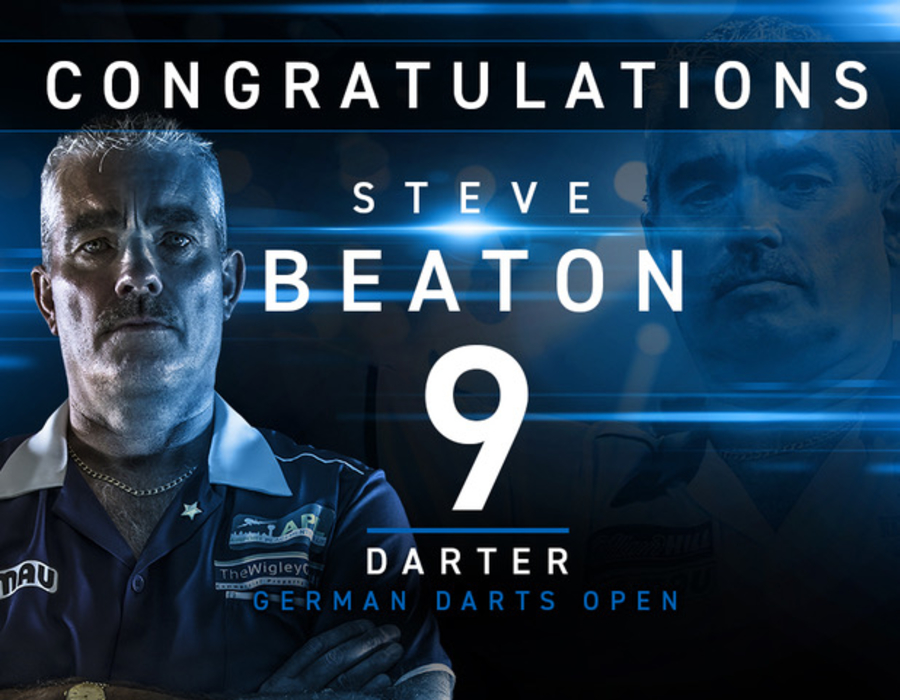 The Bronzed Adonis, Steve Beaton hit the third PDC 9-darter of his career in during his first round win over Kirk Sheppard at the German Darts Open, Saarbruecken this weekend.

It was the first streamed/televised perfect leg that Beaton had hit in his PDC career, as he went on to defeated win 6-3 in the opening round.  The 55-year old has been a staple of the PDC top 32 since joining the professional circuit in 2001, this feat in Germany further cements that class really is permanent.

Beaton hit a 150 finish in the opening leg of his first round encounter, before rattling in a 177 to kick off the perfect start to leg 2. Next came a 180 from the former World Champion's silky smooth action, before he finished off 144 on double 12 for the finish.

This is the third nine-dart leg that has been hit on the European Tour, a stark contrast to recent years on the continent. Michael van Gerwen famously ended the “Ross Smith” curse in June 2018, as he hit the first 9-dart finish on the Euro Tour for five years.

Despite a further 3 ton-plus finishes in his second round match with Gerwyn Price, which included pinning 5 out of 5 of his attempts at double, Beaton fell to a narrow 6-5 defeat. The action comes thick and fast for Steve as next up will be the continuation of Players Championships in Barnsley tomorrow (30th April) before taking to the stage in the Austrian Darts Open this weekend.

World Number 1 Michael van Gerwen lifted the German Darts Open title, as he would go on to defeat Ian While 8-3 in the final. It was the 31st European Tour title for Mighty Mike, who had to battle through three last-leg deciders and survive five match darts to claim victory.

The Dutchman had to navigate a tough field as he defeated Dimitri van den Bergh, Raymond van Barneveld, Nathan Aspinall and Dave Chisnall on his way to the £25,000 winner’s prize.