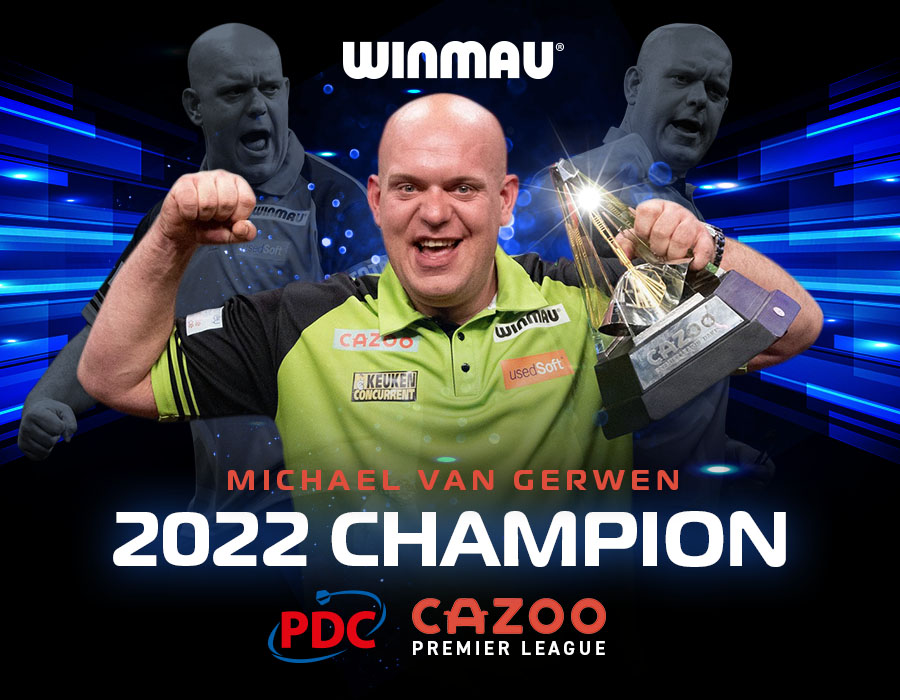 Michael van Gerwen ended an 18 month wait for a PDC Major title after winning the Premier League in Berlin, clinching a last leg decider in an 11-10 win against debutant Joe Cullen. The Dutchman went level with the legendary Phil Taylor with his sixth Premier League after finding double fourteen with his first dart for the title, after The Rockstar missed a match dart himself at double sixteen for a 68 out.

The Three Time World Champion wins the trophy along with £275,000 as he goes into a period of surgery to his throwing hand, keeping him out of the World Cup. Regardless, the 33-year-old will have full focus on celebrating his title in a campaign that saw him pick up £30,000 in bonuses after back-to-back night wins in Exeter and Brighton, before a further a win in Leeds on Week 9.

There was a total of eight maximums for the Berlin crowd to savour in the Final with five in favour of the newly crowned Premier League champion. Both also averaged just shy of a ton, as the Rockstar averaged slightly higher at 99.36 across the twenty-one legs played. The doubling from both was also on point with Cullen checking out at 50%, whilst the World Number Three recorded a percentage of 47.83%.

Jonny Clayton the league campaign winner, fell short to a rampant Joe Cullen in the Semi Finals, finding 11 maximums in a 10-4 victory in the opening match of the night. The Bradford thrower also averaged 100.76 and raced into an early 6-0 lead on stage, including the highest checkout of the tungsten tussle of 101 in the second leg.

The Ferret will be disappointed in the manner of his defeat after such a successful league campaign, winning four nights in the league format accumulating 40 points over sixteen weeks of action. The Englishman hit tops with his first dart to seal his tenth and final leg, getting the better of the Welshman in their most important meeting of the competition.

Michael van Gerwen avenged his 10-4 defeat in Copenhagen, by beating James Wade by the same score line in the second Semi Final on Finals Night. The Machine failed to find a maximum in fourteen legs of darts with his opponent finding six, as the Dutchman averaged 99.76 in reaching his eighth Premier League Final.

The Winmau man found the highest checkout in the third leg hitting 110 to take a 2-1 lead, after breaking on double seventeen in the previous leg. The six-time champion also hit 47.62% at his doubles, finding double sixteen to finish 48 in the fourteenth and final leg to close out victory in Berlin.

Joe Cullen can hold his head high on what has been a memorable Premier League campaign, winning two Premier League nights in Rotterdam and London, and providing high quality arrows with his ability on his scoring game and his relaxed approach on the outer ring.

The night though belongs to the most successful player in the PDC of 2022, with Michael van Gerwen adding the Premier League Trophy to his 3 Euro Tour Scalps after withdrawing from the World Championship back in December due to COVID. With the Matchplay coming up, his eyes will be fully focused on breaking back into the World’s Top 2 on the Order of Merit.