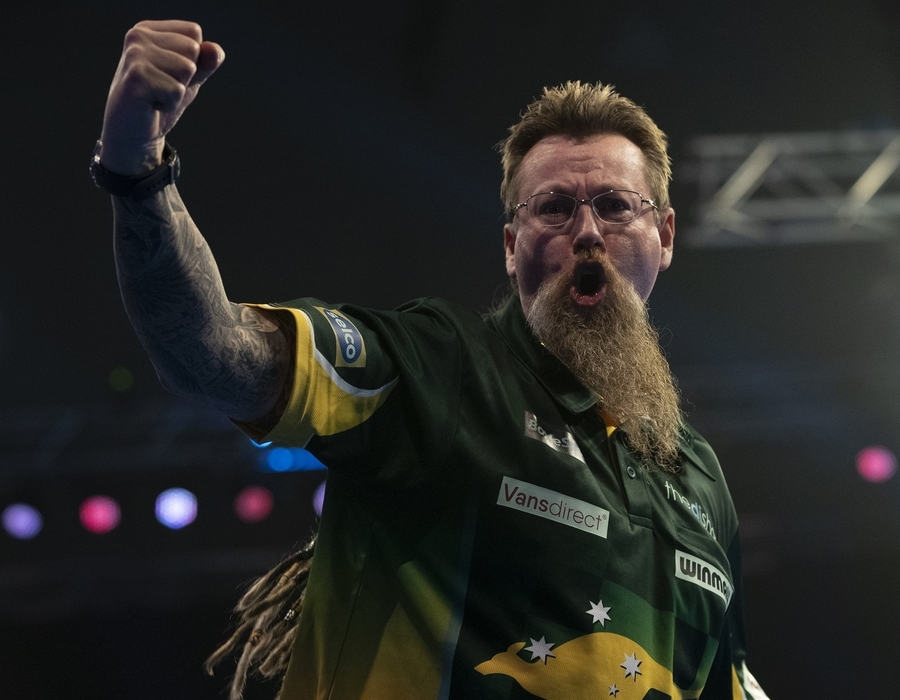 The Wizard’s scoring power ensured an enthralling game that went all the way, as Whitlock survived 8 match darts before pinning D8 for the victory.

Simon Whitlock claimed what he described as his best-ever victory to ensure that a new name will be engraved on the Eric Bristow Trophy in 2020.

"I feel on top of the world," said Whitlock. "It's incredible - I think this is my best victory I've ever had in darts.

"To beat Michael when he's off his game is another thing, but to beat him when he's playing well - which I thought he did today - is amazing.

"This is becoming a nice habit - I've won three on the trot now but I'm playing good darts now.

"I was enjoying the moment but I didn't expect to get a shot. I was thinking it was all over but somehow he missed and gave me a chance, and I took it.

"I showed belief, guts and determination. The only time I was in front was when I hit the winning double - it's crazy."

Three-time champion Van Gerwen had led 2-0, 9-5 and 11-7, with Whitlock pulling back to 13-all before a stunning 146 checkout looked to have broken his resistance as the Dutchman moved 15-13 up before reeling off another 3 legs on the spin for victory.

An incredible day of quarter-final action saw 121 out of a possible 124 legs played across four gripping contests, with two going all the way to a sudden-death 31st leg.

De Sousa becomes the first Portuguese player to win through to a televised semi-final after picking up what he admitted was the biggest win of his career.

Smith had hit back from 8-2 down to lead 10-9, showing his class as he twice set up a possible nine-dart leg and also took out a ten-darter, but missed doubles in the latter stages gave De Sousa his chance to progress.

"It was an amazing game and it's a big win for me, the biggest victory for me," said De Sousa. "I'm really happy and I enjoyed it a lot.

"He is one of the strongest players in the world so I'm happy to beat him. I tried everything in my mind to keep my game stable.

"Michael has beaten me three times before so I knew I had to be solid, but he got stronger and stronger during the game and punished me. It was crazy, he missed two nine-darters.

"When I made it ten-ten, I knew I had to relax and play my darts, and I did that. I didn't give up and I had to be patient.

"It's the first time I've played in the Grand Slam and I'm so happy for everyone who supports me; my family, my friends and my team. It's a crazy year for me."

James Wade remains on course to reach his third Grand Slam of Darts final after taking a 16-13 win over Damon Heta in another high-quality last eight encounter.

Australia's Heta, though, hit back to level the game after 26 legs as he searched for his maiden televised ranking semi-final, only to see the left-hander take three legs without reply to claim victory.

Legs of 15, 15, 13 and 11 darts from Wade saw him make a brilliant start and establish a ton-plus average which he would retain throughout the contest.

Tops moved Wade four legs clear once more, but 2019 Brisbane Darts Masters winner Heta showed his quality by finishing 108 and 142 to kick-start his response, before landing a ten-darter and a 101 finish as he pulled back to 13-all.

"I'm so happy I won," said Wade, who also reached the European Championship final three weeks ago. "I did the right things at the right times of the game.

"Even though I was well in front and I was probably the better player for the majority of the game, I believe I was lucky.

"I thought he would get nervous and cave in, but he didn't - he showed a bit of class and showed his resilience and I was fortunate he missed a few shots.

"The 96 finish was massive - if I'd have missed that, I'd have lost the game. I've played in one or two games before and I know what wins and loses games, and at that point I thought it was enough to keep me in the game, not win me the game.

"It was quite a good game and the better player on the day won. I'm grateful to still be in the tournament and I'm looking forward to my next game. I've been there and done it and I'm enjoying myself."

Dimitri Van den Bergh edged out Nathan Aspinall 16-15 in a final-leg shoot-out as he continued his bid to follow up July's World Matchplay triumph with another huge title.

Aspinall played his part in another epic contest, leading 11-8 at one stage and coming from 14-12 down to lead 15-14, only for Van den Bergh to finish the stronger and claim the game's final two legs.

"I'm so chuffed that I'm through," said Van den Bergh, who now plays Wade. "It was a proper emotional rollercoaster and I'm still in that ride.

"I kept battling and never gave up because today was a such a struggle. I lost the first three sessions 3-2 and went down 9-6, but I kept digging in and believing in myself.

"We didn't perform the way we can but at least I have a chance to improve in the next round, and I will learn from this quarter-final. It's a lesson for me but this week is going very well and I'm playing strong."

Van den Bergh opened the tie with six perfect darts but lost the first leg and trailed 2-1 before eight successive breaks of throw left Aspinall 6-5 up.

The Belgian held throw to level, but Aspinall finished double ten, 74 to break and double eight as he opened up a three-leg gap, which he retained at 10-7 and 11-8 despite Van den Bergh again throwing six perfect darts in one leg.

The Belgian finished 82, 130 and double four as he hit back to level at 11-all, and added another three straight legs as he moved into a 14-12 lead.

Aspinall, though, levelled as he punished four missed doubles from the two-time World Youth Champion, and fired in tops for a third straight leg as he moved 15-14 up.

Van den Bergh landed a 180 and posted double 16 to send the game into a deciding leg, in which Aspinall was left on 36 after landing a 180 only to see his rival pin double 18 for the win.

Monday's semi-finals will see Whitlock take on De Sousa in the opening contest before Wade faces Van den Bergh, with the tournament then set to conclude with the final on Tuesday.

Van den Bergh is now the 6/4 favourite with sponsors BoyleSports to win his second televised title of 2020, with De Sousa the 5/2 second favourite, Wade priced at 7/2 to win his tenth televised event and Whitlock 4/1 to taste glory for the first time since the 2012 European Championship.

The BoyleSports Grand Slam of Darts is being broadcast live on Sky Sports, as well as through the PDC's international broadcast partners including RTL7 and DAZN and for PDCTV Rest of the World Subscribers.