Joe Cullen, Darts’ answer to “Rock n’ Roll, joins Winmau in his crusade towards the very top of the PDC World Rankings…

"My whole life has changed so much over the last few years that things I'd take for granted before have become way more important, and that is no doubt in response to how much harder life is on tour these days."

Joe was discovered as a rising talent out of the blue, when he qualified for the PDC's UK Open in 2008 at a Riley’s amateur qualifier, where he waltzed through a tough adult field to find himself qualifying for the main event.

Billy Lovell of leading Sports Management Agents, MODUS, said “Watching Joe develop his natural talent into the professional he is today has been a pleasure, as many great players often don’t realise how hard it really is to make it at the highest level. It’s unbelievably tough to make it to the top in any sport. When you get a talented player like Joe, who’s prepared to work with you, through all the up’s and down’s, it’s so rewarding to see him succeed.”

"It was really weird” said Joe “I had played a few pub events and opens and was doing really well on a local level. I entered the Players Qualifiers as a way to get some experience and, within 24 hours, suddenly found myself at a Major PDC event and signed up with the MODUS Management Team.”.

The “Rockstar” described what was to become a fascinating journey through the ranks in the PDC, where he showed flashes of brilliance in some of darts most outstanding games, including a barn stormer against Australia’s Corey Cadby in the first round of the 2017 World Championships.

In recent times Joe has also picked up his first PDC ranking titles in 2017, and earned his maiden European title in 2019 at the PDC European Matchplay.

Simon Hall, Head of Marketing for Winmau, said "Joe’s talent for the game has never been in question but what has changed swiftly is his steely determination that he is one of the best players in the World. He’s making strides like several of the younger guns on the PDC Tour into a genuine Major contender, as seen by last week’s International Darts Open win. We are so happy that Joe has chosen to join Winmau right now. There’s no doubt that he’ll be challenging for the very top rankings over the next decade and this is set to be a hugely exciting time for both Joe and Winmau.”

Joe's latest European Tour Title has been on the back of several superb results, catapulting Joe into the all-important Top 16 of the PDC Ranks.

With his darts future on a firmer footing, interestingly it may have been the closely related sport of snooker that got more of Joe's attention, as even to this day that is Joe’s first love.

"I absolutely love my snooker and always have done, darts came second but I was better at it so carried on with that!"

Lee Huxtable, Winmau’s Head of Technical, said “It’s been a real eye-opener working with Joe on his new barrel. We’ve incorporated a really subtle undercut which gives Joe the perfect location reference and combined it with jaw droppingly stunning detailing.”

Joe’s new darts are set to launch in early December, just as the Rockstar starts a new chapter in his life. Joe commented "Moving on is a big decision, but it’s one I’m really comfortable with. Winmau has proven beyond doubt just how good they are with top darts players. Several of my closest mates on tour have been with Winmau for many years, through both thick and thin, and to me that sets them out as very special".

To keep in touch with all Joe’s up to date news and his latest product launch follow: 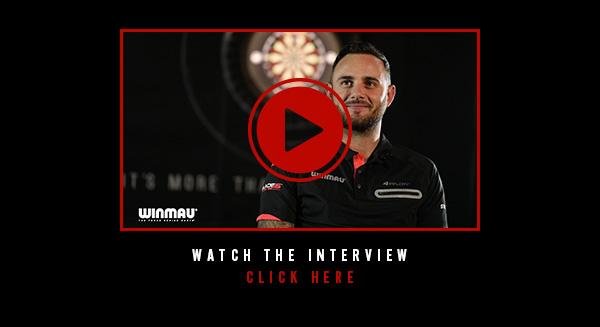